When you make a claim about racism like Halle Berry does, you’d better make sure it’s true. There are TONS of people on Facebook saying that it’s a big load of B.S.

Maybe it’s because celebrities are the uppity privileged class, they need to make sure everyone knows how much they suffered BEFORE fame.

It’s fashionable these days to scream about sexism and racism — especially if you’re a celebrity.

Look at Ashley Judd freaking out at the airport because someone from TSA called her ‘Sweetheart’.

Halle Berry is claiming that she suffered from racism as a student because of her mixed-race heritage. Berry’s father is black and her mother is white. She discussed in an interview how difficult it was to be bullied and ostracized for being biracial — but has ‘hope’ for her daughter’s generation.

She had it so tough.

She was taken out of the rough ‘inner city’ to the suburbs of Bedford in northern Ohio, that was ‘all white’.

There is a private group on Facebook called, ‘You know you grew up in Bedford‘ that posted a link to the People article featuring Berry’s interview. Many are calling it B.S.

Rob C.: ‘She’s crazy, Bedford wasn’t all white. I grew up in Bedford and Bedford heights 35 years, there are plenty of black folks then and still are.’

Because my mother was white and my father was black… we got called Oreos and names, and kids just didn’t understand, so we were different. We were the brunt of a lot of jokes. So, I think my need to please and my desire to achieve was because I was constantly trying to prove that I was as good as the other white students. I felt very ‘less than,’ and I thought, ‘If I can beat them at everything, then I can be as good as them.’

Some say that she was popular and well-liked:

Rachel W.: ‘Class of ’86 here…..I didn’t know Halle personally so while I certainly can’t speak to her individual experience I can speak to how I looked at her and how all of my friends looked at her in high school. My female friends (black and white) and I thought she was gorgeous and wanted to look like her while my male friends (black and white) had massive crushes on her and wanted to date her. Curious also that she left out the fact she was elected Prom Queen by the entire student body, black and white.’

Shannon T: ‘I remember everyone always being in awww [sic] of Hallie. She was always gorgeous and everyone seemed to look up to her.’

Erna B.: ‘She is not telling truth as she was Prom Queen voted by the entire class. Bedford schools have always been mix and everyone was happy was pretty friendly.’

Paul T.: ‘Class of 84. We were at least 40/60 and never heard anything other than how pretty she was. She was our prom queen in 84. Hollywood distorts things.’

Here’s her photo from the 1984 yearbook that confirms that she was Prom Queen courtesy Classmates.com. 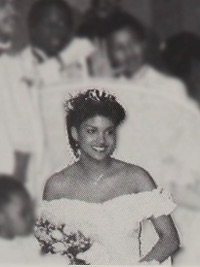 I wonder if she was as excited as when she won that Oscar for ‘Monster’s Ball’?

Others just call out the B.S. plainly:

James D.: ‘Bullsh*t, She was in my art class at Bedford HS, I talked to her everyday, she was a cheerleader too and treated like a queen! I always had respect for her until now!’

Karen Z.: ‘I totally agree. She was popular. She was a cheerleader in the band as a flag girl I believe. Everyone likes her. It’s all a story to get people to feel sorry for her. So sad she has to act that way.’

Well, she was well-liked.

Not so much now.

She is getting sympathy from some circles, however:

Cindy H.: ‘I’ve always have been proud to say I went to school with Halle. Even though she was younger than me, I always thought she was beautiful. I remember watching her at the local beauty pageants she was in. (Bedford Heights Home Days) If she was bullied, I never witnessed that. Sad to hear she felt that way, I certainly would have been an advocate for her.

I grew up in Metro Estates, which certainly changed over the years, yet my family is still there.

Halle was one of the most popular girls in school.

Others say that Hally Berry has been lying about Bedford for years:

Jeff A.: ‘I remembered reading an article 10 or more years ago where she stated the same things.’

Cheryl M.: ‘She gave an interview on Lifetime about 20 years ago claiming all the same stuff’

One man claims to have been friends with Halle’s sister and gives the straight goods.

Gary C.: ‘Ok let’s set this record straight! I was friends with her sister and Heidi was a very sweet person. Halle on the other hand didn’t have time for “friends” unless it benefited her in her quest for the next competition she wanted to win. If she was treated any differently than anyone else it was due to her own attitude not anything to do with bullying or race. I have 40 years experience being a teenage boy so I know that guys look at 3 things in a girl, face, body and personality. She had everyone’s attention on the first 2 and then lost all the attention with the 3rd. Were there some racial issues back then? Yes, were they real bad or was a person like her involved? No, not getting everyone’s attention like you want is a far cry from being bullied.’

Dawn T: ‘Halle is whining for attention. If she wanted to change the way things are she would be doing something, anything, for kids in her home town. She could easily afford to give a lot, but she doesn’t. What has she done in the last thirty years to help Bedford cheerleaders? Any scholarships for local disadvantaged girls? Has she built a playground? A shelter? Put any Oakwood kids through college? Seriously? What has she done for the biracial kids walking the path that was so tough for her?’

You mean have celebrities actually put their money where their mouth is?

Cindy K: ‘I know her very well. This is another ‘Hollywood’ story that makes for a good interview. She was NEVER picked on! She was popular and very outgoing… Years ago in another interview, she said she was beaten by a high school boyfriend and went deaf because of it, that never happened! On Oprah, she said she was accused of “stuffing” the ballot box because she won prom queen, that never happened! She tied with Vicki and won the coin toss! See the pattern here?’

Brian F: ‘Nothing like an embellished sob story to promote a washed up actress. Who even cares about her anymore. Sick of hearing about poor millionaire actors.’

Wendy P.: ‘This isn’t the first time she has LIED about Bedford- 10 years ago in a Cosmo article she talked about how she experienced racism- I graduated in ’81 she graduated a couple years later w/my sister and my dad was her mailman- as previously stated she was super popular, all the guys wanted to date her, all the girls wanted to be her, I don’ t know why she continues to say this- maybe for attention but I hate that it makes Bedford look bad’

Some were even posting photos as proof. Halle Berry was a cheerleader, Prom Queen, Class President, Editor of the school paper and even won a Miss Teenage All-American pageant. 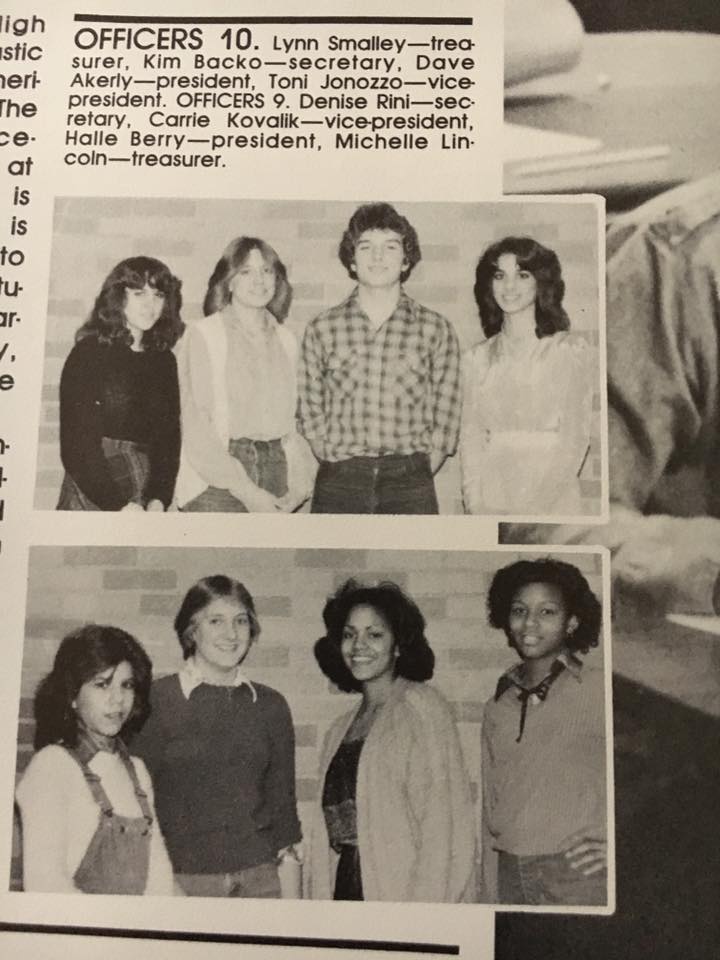 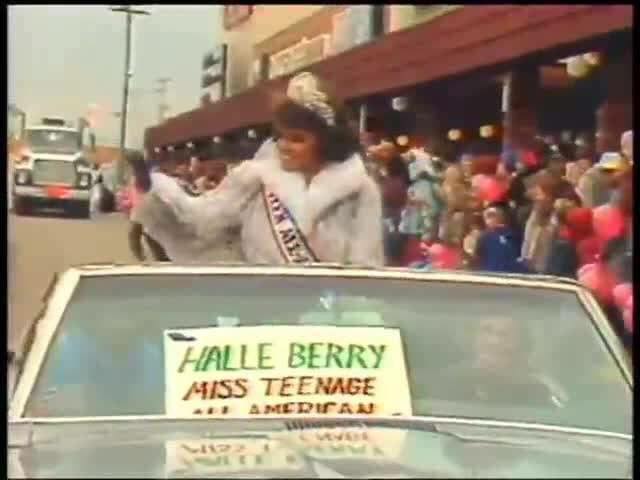 And here’s a photo from the ‘all white’ high school prom where Halle was Prom Queen. 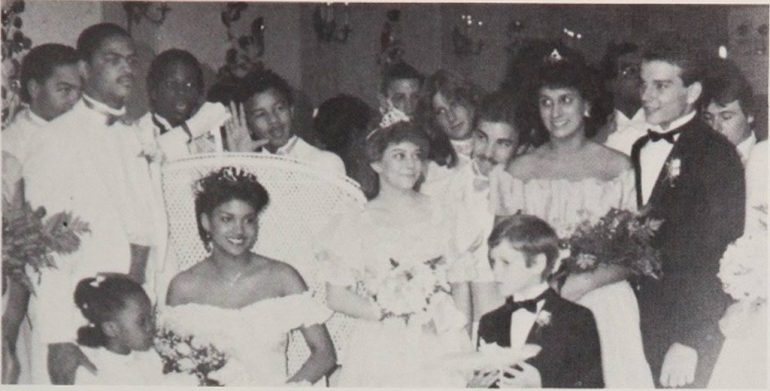 Now, we’re not saying that there weren’t individual incidents of racism that Halle faced. That’s quite possible. There are horrible people out there.

But here’s the thing — she flourished in high school.

And she had many people cheering her on.

What’s more, she rose above it and is an incredible success.

To people that suffered real bullying, her ‘they called me Oreo!’ is whiny and ridiculous.

Check out this one response that brings the point across well:

Debbie M.: ‘Bedford was 35% minority when she attended. Being the principals daughter, I was called every name in the book. I had one student, who only knew who I was because I was “bud’s daughter” call me bit*h every single day in the hallway. I had bottles and rocks thrown through my house windows. Bomb threats were called to my home. That’s discrimination. But I dealt with it and I’ve never boo-hooed about it all over the media/Facebook. My brother was one of her best friends. He will attest that she is exaggerating. She needs to find something new to try to regain the spotlight.’

And this last one to bring perspective.

Erna B.: ‘We all have been bullied at one time in our life. You have to just move on and make the best of situations in life.’

Maybe Halle really should try something else — like honesty.