Thugs on both sides are wrapping themselves in a veil of virtue, even invoking religious language to justify their ’cause’.

And how do their claims stack up?

On one side, people claiming to be Christian are rallying around their white skin and denouncing the evils of black people, Jewish people and anyone else they might think of despising.

The other side (Antifa, BLM and all the Social Justice Warriors) is calling EVERYONE they don’t like a Nazi, and then they are going around punching those ‘nazis’ (and kicking them, pepper-spraying them, cracking their skulls with bike locks and skateboards… you know, ‘peaceful’ stuff)

If you want a great parody of what the supposed anti-Nazis are doing, give this one a couple minutes of your time. The guy who made it put EXCELLENT production value into it.

This is amazing. Punch a Nazi by Chris Ray Gun

Don’t have time to watch the whole thing right now? This image captures the spirit of it: 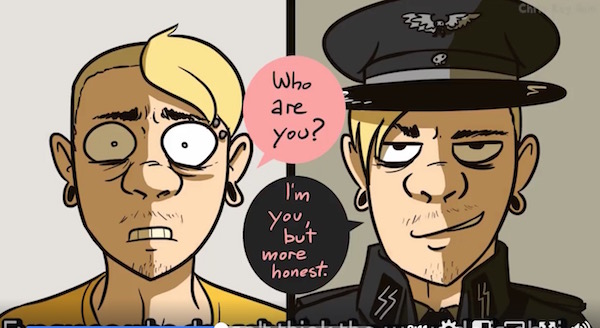 So basically, we’re looking at two groups who are seething with hate toward each other, thinking they are the white knight (so to speak) riding to the rescue of society against the cultural Boogey Man. And they are coming armed to the battle.

We have SEEN the Christian response. There was a pastor who led a movement that changed our nation’s history.

He stood up, once to tell us about A ‘Dream’ he had.

Remember him? He was a Reverend.

His goal was for us ALL to be EQUAL. Not to punish the other side for past sins.

Why would he SAY such a thing? Because the Bible does, too.

What about Jesus OWN words?

He spoke about race. There was a group with real racial conflict with Jewish people of his day. They wouldn’t even associate with them. They would walk a LONG road around their territory so as not to ‘sully’ themselves through even being among them.

And Jesus made him the HERO of his story about showing love for our neighbor when the moral pillars of his society both failed in showing basic Christian love.

We mean, of course, the parable of the Good Samaritan.

He similarly showed particular care and concern for the Woman At The Well (also Samaritan) making her one of the very few people to whom Jesus expressly admitted his true nature and purpose.

When Jesus (did we mention he was Jewish?) was asked about the most important rule of all, what did he answer?

But surely he doesn’t mean THOSE people? They’re such douchebags and assholes. And they’re MEAN to me.

But I say to you, love your enemies, bless those who curse you, do good to those who hate you, and pray for those who spitefully use you and persecute you, that you may be sons of your Father in heaven; for He makes His sun rise on the evil and on the good, and sends rain on the just and on the unjust. For if you love those who love you, what reward have you? Do not even the tax collectors do the same? And if you greet your brethren only, what do you do more than others? Do not even the tax collectors do so? — Matt 5:44-47

So, do we need to pick sides and say which one is the ‘bad guy’?

Next time they pretend to be on the side of virtue, you can set them straight.

Check out Doug Giles and Rich Witmer take on this very issue in the latest Warriors & Wildmen podcast: