Aren’t you glad you don’t come home to someone like these ‘journalists?’
These killjoys could probably find a downside to a cure for cancer.

Go ahead, look us in the eye and tell us you aren’t fake news.

(They’ve taken that enemy of my enemy is my friend to some ridiculous extremes. But when you paint your own President as your ‘enemy’, you’ve painted yourself into a corner.)

Remember, she runs a fashion company. One that – despite efforts to derail it – was doing quite well.

A former Vogue writer, now (demoted to?) scribbling for Newsweek made sure to get some digs in.

The title sets the tone, doesn’t it?

MELANIA, IVANKA AND IVANA TRUMP WEAR HIGH HEELS, A SYMBOL OF EVERYTHING THAT IS BEAUTIFUL AND HORRIFYING ABOUT THEM

With an introduction like that, we’re obviously in for a thoughtful, rational article, aren’t we? Let’s break it down.

She opens by feigning concern about the eventual health of their feet for wearing high arches too often.

(Was it necessary to use the term ‘mountain goat’ in describing their ability to walk in them? That isn’t ‘disparaging’ at all, Nina?)

The article calls them ‘out of fashion’, quoting such worthy voices as Miley Cyrus.

That’s not the real objection, is it? After all, by this definition, strictly speaking, Michelle wore stilettos, too…

Kitten heel – Wikipedia
https://en.wikipedia.org/wiki/Kitten_heel
A kitten heel is a short, slender heel, usually from 3.5 centimeters (1.5 inches) to 4.75 centimeters (1.75 inches) high with a slight curve setting the heel in from the back edge of the shoe. The style was popularized by Audrey Hepburn, and more recently by Theresa May, Rachael Butler, Maria Kearns and Michelle Obama … They are on the shorter end of stiletto shoes, which can have heels as tall as …

… just a shorter version of them.

High heels just exaggerate the femaleness of the walk. So to deconstruct why Trump women wear high heels: They are just buying into traditional binary views of male and female.”

Oh No! You can be fired from Google for less!

“High heels thrust out the buttocks and arch the back into a natural mammalian courting—actually, copulatory—pose called ‘lordosis.’ … [Heels] are a ‘come-hither’ signal.”

Which, of course, is inappropriate for work, right Nina? So would you care to explain why you were wearing these? 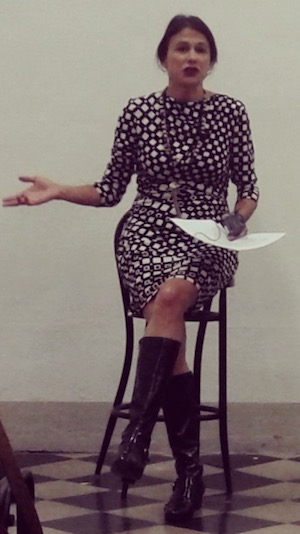 Don’t high heel BOOTS have an air of bondage about them?

Nina is just coming across as a ‘mean girl’.

Some people never grow out of Junior High.