How many times have we heard the Left accuse us of ‘wanting to roll back the clock 50 years’?

Well, what would you call this?

Or 100 years, or whichever number they might think is suitably melodramatic.

So how is it Mad Maxine getting away with this?

She’s always been a little loopy, she’s made for great fodder here at ClashDaily for the last 6 months or so.

And having been awarded ‘Most Corrupt Politician’ doesn’t help, either.

And she and her family personally profited from her rise to racially demagogic power. She owns a tony mansion in predominantly white Hancock Park, several miles outside her congressional district. She secured an ambassadorship to the Bahamas for her husband, a former pro football player and car salesman whose main qualification was having traveled to the island for a vacation. Her daughter, Karen, has scooped up nearly $650,000 in payments from Mama Waters’s slate mailer operation for her federal campaign committee since 2006, the Washington Free Beacon reported this week. And Mama Waters owes her well-heeled daughter an additional $108,000.

After describing the millions she made in profits relating to using her political influence, the article continues:

The newfound Maxine Waters Fan Club might want to know that Waters’s government cronyism and self-dealing earned her a “Most Corrupt member of Congress” designation from the left-wing Citizens for Responsibility and Ethics in Washington five times — in 2005, 2006, 2009, 2011, and 2017. –National Review

But that doesn’t seem to stop ‘Auntie Maxine’.

As you can see in the video, above, Maxine was asked about whether black people need their own party.

(Related Story: Rosie Wants Women To Form Their Own Political Party Centered Around This Demonic Practice)

Instead of saying the obvious answer: ‘No, of course not. What’s wrong with you?’ She said ‘not yet’.

Because they don’t yet have the numbers.

Her objection to a ‘Racially Pure’ party is not a MORAL one so much as a TACTICAL one. (And they dare call the Right ‘Hitlerian’.)

Has she ever heard of a guy named Rev. Dr. Martin Luther King?

Is that name letting any bells ring? No?

Has she ever heard of the phrase e Pluribus unum?

No, she’s part of the ‘Divide & Conquer’ party. They have spent so much time carving out aggrieved niche groups that those groups are starting to splinter.

How long before, for example, when Feminists realize that the gender-fluid movement turns the formerly ‘oppressed’ Feminists as an oppressor group that defends the status quo?

Those movements are mutually exclusive.

Or before the lockstep support of Islam (chasing their large voting block) is in conflict with BOTH Feminism (based on Sharia’s unequal rights, and subservient role of women) and LGBT, what with their habit of throwing gays off rooftops.

Do we want to STOP Maxine from getting this message out?

Hell no! We want EVERYONE in America to see just how myopic she is.

One would hope that someone goes to Washington to represent ALL of a constituent’s interests. Not just those with the ‘right’ skin color.

Two terms of Obama was supposed to put a stop to this madness. Not double down on it.

How would Maxine even know what her constituents need? It’s not like she even lives there.

Maxine has represented California’s 43rd Congressional District since 1991. That’s an area that includes South Los Angeles — which is the new unstigmatized name for South Central Los Angeles. You know, the area still plagued by gangs and crime.

You might remember seeing images of her district back in the early ’90s during the Rodney King Riots. 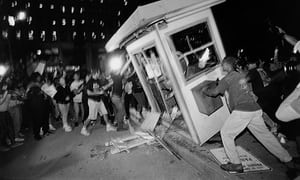 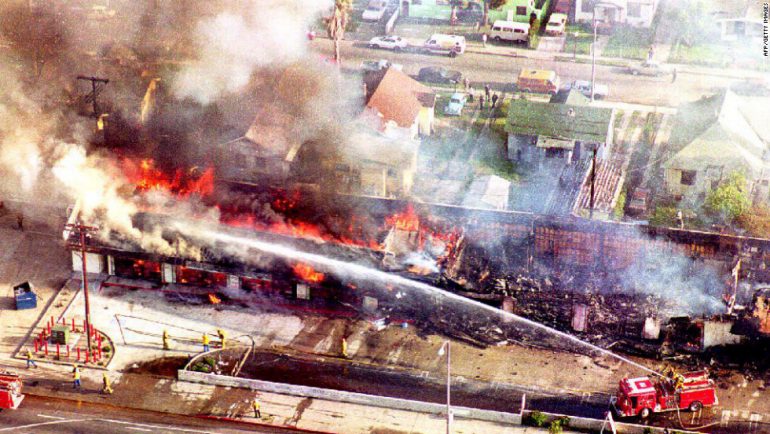 The crime rate has dropped but gangs and violence are still issues in her district.

Of course, that’s not where ‘Auntie Maxine’ lives.

Perhaps if ‘Auntie Maxine’ stopped with her impeach Trump mania and maybe paid a little more attention to matters in her district, you know, she’d be busy representing all of her constituents — instead of just the black ones.