Nancy, Nancy, Nancy… have you considered consulting a doctor? First those weird mental lapses with your speech, and now this?

Nancy Pelosi will always — always — find a way to accuse Trump of something.

Most of those things are just stupid.

Today was no exception. Let’s set up the contrast.

Here is Trump’s call for unity after hearing about events in Charlottesville.

Notice how he leads off with a denunciation of the events there:

“…Condemn in the strongest possible terms, this egregious display of hatred bigotry, and violence on ‘many sides’…” 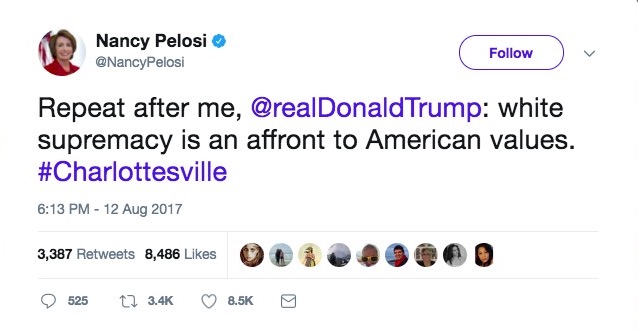 Her party is so married to the racist narrative that she completely ignores the presence of Antifa, and their well-documented violence in past conflicts.

Even White Supremacists deserve not to be attacked, and at this point, nobody knows who threw the proverbial first punch.

What we DO know is that people on both sides were spoiling for a fight. The gear they BOTH brought with them proves it. Pepper spray. Beating sticks. Shields. Helmets. And everything else they brought with them.

There is bigotry on all sides, and we must condemn all forms of racism.

This bro summed it up nicely:

Every normal person watching the far right and far left battling each other today: pic.twitter.com/LJz7KfYeSP

The problem isn’t Trump’s call for unity, and for both sides to give up their hate.

The problem is that Pelosi cannot bring herself to call out Antifa or BLM for their wrongdoing. It could cost her votes.