This bro has it absolutely right.

Milan Kundera is a Czech-French writer who interwove philosophy into his novels — much like Miguel de Cervantes, the author of ‘Don Quixote’.

Kundera was stripped of his right to teach, his books were banned and he had to leave Czechoslovakia.

Recently criticized for the sexualization of women in his novels, (because everyone is outraged these days,) Kundera made some astute points into the nature mankind — especially his works in the late 70’s that were written in exile. His books were banned under the communist regime in his home country, and he moved to France where he wrote freely. He is best known for his novel, ‘The Unbearable Lightness of Being‘.

It is this quote on rewriting history that is relevant: 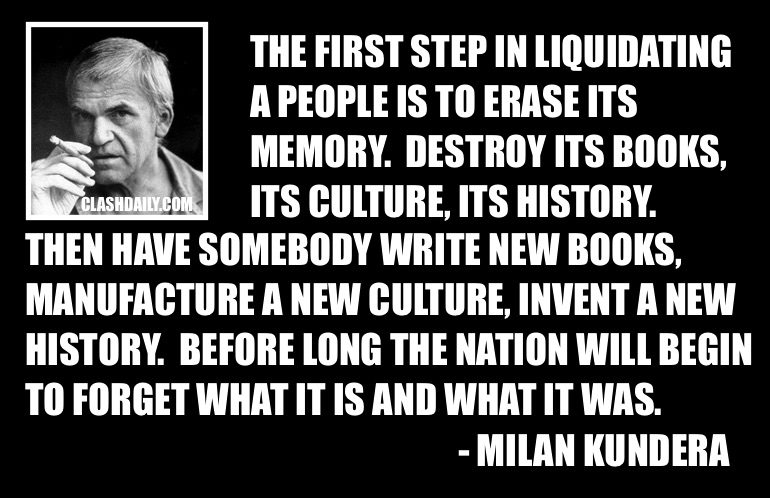 Kundera would know about that from his own history.

Would all these would-be historical purgers be unbiased in their historical revisionism?

Our country is based on several key points, and they are enshrined in our founding documents. There are principles that America stands on that no other nation on earth does.

We have freedom here that are not enjoyed anywhere else in the world.

And we need to protect that.

Our history must be preserved, and maybe we disagree what that looks like, but better to have a conversation that shut it all down.

That’s not what America is about.

It’s worth remembering that.

Especially after 8 years of an authoritative President that was fine shoving things that Americans didn’t want down their throats in order to ‘fundamentally change’ the country.

Here is another fantastic quote by Kundera:

As Ecclesiastes 1:9 says, ‘There is nothing new under the sun‘.

(For you Latin dorks like me, it’s nihil sub sole novum.)

History is constantly repeating itself.

These markers help to keep us from going down those same dark paths again.

And that is imperative.