Here’s a good-faith concession we could easily offer to show our real contempt of racists while we sort out what to do with the monuments.

Common ground is an important starting place for reconciliation. And we have a modest suggestion that would be fairly simple and easy to do, not very controversial, that might be a good first step to finding common ground and a way forward.

The marchers in various city streets want Civil War monuments removed. A lot of people whose ancestors died in those battles do not want to see their local history destroyed.

It’s a thorny issue and one that should be thought through carefully.

Meanwhile there is some low-hanging fruit we could EASILY act on to show a spirit of good faith.

There are taxpayer-funded buildings… a lot of them, that are named after KKK members.

How about we put the removal of monuments on hold until we have a formal plan of what to do with them… but in the meantime, we start renaming buildings named after a prominent KKKlansman?

He wasn’t just ANY KKKlansman. He was a RECRUITER! 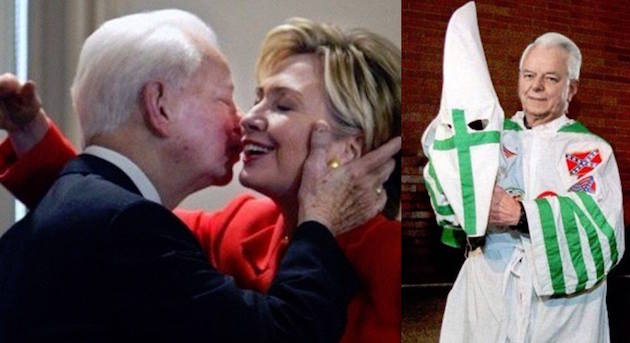 Sen. Robert Byrd not only was a KKK member but led his local Klan chapter

Byrd joined the Klan at the ripe young age of 24 — hardly a young’un by today’s standards, much less those of 1944, when Byrd refused to join the military because he might have to serve alongside “race mongrels, a throwback to the blackest specimen from the wilds,” according to a letter Byrd wrote to Sen. Theodore Bilbo at the height of World War II.

…He had come of age as a member of the Ku Klux Klan and cast a “no” vote on the landmark Civil Rights Act of 1964 that prohibited discrimination against African Americans and others.

…No single obituary of Byrd mentioned his 2001 use of the term “white nigger,” an early 20th-century anachronism that Byrd employed not once, but twice during an interview with Tony Snow. –Daily Caller

It turns out there are a BOATLOAD of things named after him.

There must be hundreds of people whose names are far more worthy of such prominence than that toad, don’t you think?

More than 50 buildings built with funds from US taxpayers directed to West Virginia are named for either Byrd or his wife, Erma Ora Byrd (née James).[2] Several transportation projects named for Byrd have gained national notoriety, including the Robert C. Byrd Highway.[8] Also known as “Corridor H” of the Appalachian Development Highway System, the highway was dubbed “West Virginia’s road to nowhere” in 2009 after it received a $9.5 million earmark in the $410 billion Omnibus Appropriations Act.[8] The highway received another $21 million from the American Recovery and Reinvestment Act of 2009.[8] Critics argued the traffic on the highway was too light and the cost too high for the project to continue construction until its proposed completion in 2035.[8] The State of West Virginia argued the highway was necessary as “an ideal evacuation route for Washington, about 100 miles away, in case of an emergency.”[8]

After all, if American Generals and Statesmen have any good they may have done be discredited on account of how they treated minorities, kicking Klansman to the curb should be a no-brainer.

Let’s all take note of which party they represented as we do this, too.