Rosie is calling on women to rally around this one issue and ditch the Dems if they don’t support it. Has she COMPLETELY lost it?

As you can see, Rosie has blocked me on Twitter.

(It was because of something I said to one of her sycophants — I mean followers.)

Anyway, back to Rosie’s latest ALL CAPS TWITTER RANT.

She is demanding that women break off from the Democrats and create a whole new Women’s only party that will support abortion.

That’s the one issue.

That’s the hill she wants to die on.

That’s the only issue that she really cares about.

Not really a surprise considering her craptacular parenting skillz.

The Democrats have realized that their far push left has alienated a large number of Americans, and are pivoting away from some of the ‘litmus tests’ to being considered a good Democrat. One of the things that they’re willing to be more flexible about is abortion.

‘As we look at candidates across the country, you need to make sure you have candidates that fit the district, that can win in these districts across America,’ Luján told The Hill in an interview published Monday.
Source: Daily Mail

Over the past 8 years when Barry was the Prez, Democrats have lost over 1,000 seats at all levels of government.

The Democrats are beginning to realize that calling people a ‘basket of deplorables’ doesn’t win you elections.

And perhaps excluding the many, many Pro-Life Americans isn’t a good strategy. There was so much outrage over the undercover Planned Parenthood videos that even the hardcore leftist began to take notice.

Well, some of them did. 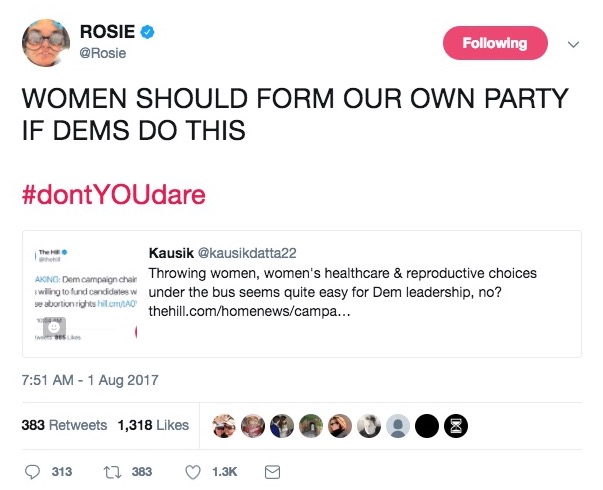 She’s even willing to ditch how-the-hell-did-she-get-elected Senator Kamala Harris that checks most of the identity politics boxes, is from California, is dumber than a wet stick, and is currently being backed by Clinton supporters and donors. 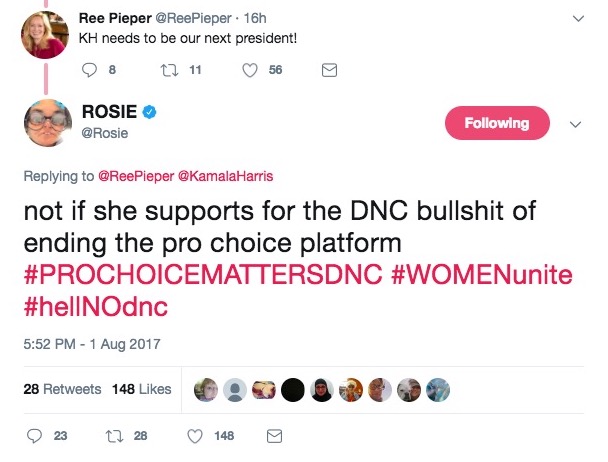 Rosie is really enamored with her idea.

(I’m guessing it’s probably the novelty of having one.) 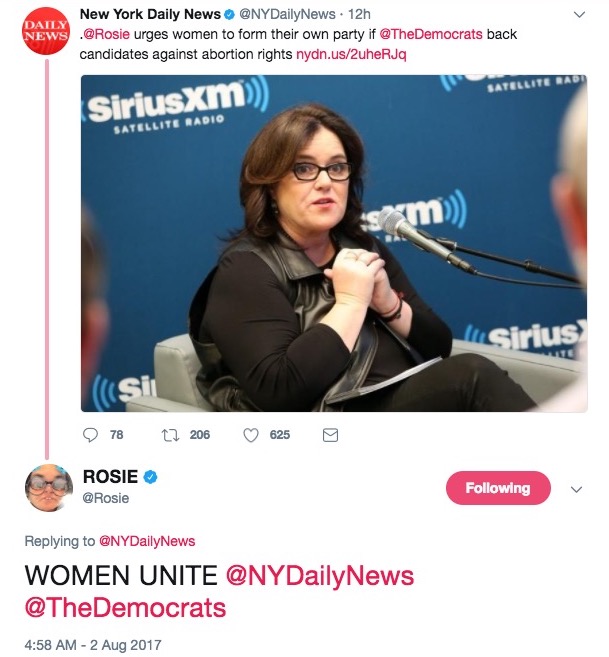 And she’s ALL CAPS WARNING THE DEMOCRATS: 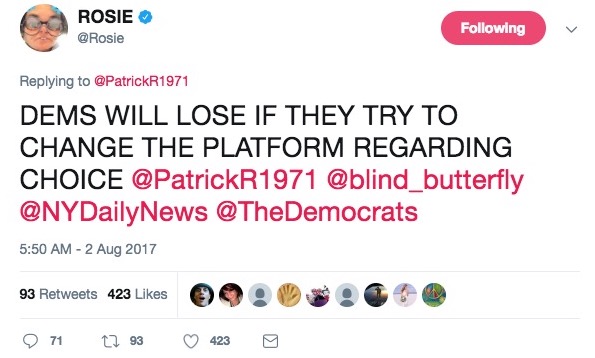 Because that makes sense, right?

Do what we say or we’ll take our toys and start a new game without you.

She just wants to ‘virtue signal’ her desire to kill more unborn babies.

We know how passionate Rosie is about killing babies in the womb, she’s made it clear. Remember her disgusting statement about wanting to smear period blood on those that hold Pro-Life views?

And this whole ‘women’ should do this thing is insulting. Women don’t all have one mind on every issue.
You can’t expect all women to agree with the sick, abortion agenda. (Saying that ‘not all women vote with their vaginas’ it’s what got me Twitter-blocked by Rosie in the first place.)

Besides, isn’t ‘gender a social construct’ to the Democrats>?

Would Caitlyn Jenner be able to join that party?

Abortion is an irrelevant issue to transgender women because they don’t have a womb. Remember, kiddies, some women have penises.

So, first, alienate Pro-Life women, just like at the Women’s March.

Alienate transgender women, and transgender men, for that matter. Although some can still have babies, they’re still ‘men’.

Identity politics is so confusing.

Watch Monty Python make a whole lot of sense on transgender issues in the 1979 movie, Life of Brian:

Somebody needs to tell Rosie that her plan would ensure Republican victories for decades as the vote splits on the Left.

Democrat women might just do this — let’s face it, some of them are shrieking, self-centered harpies that are only concerned about killing babies in the womb for their convenience.

Then the Democrats might pivot back and alienate Pro-Life candidates and voters.