How good is Trump at trolling the media? He can just HINT at pardoning someone, and everyone loses their minds.

It doesn’t really take much to set them off in the first place.

All he had to do was mention one name — Sheriff Joe.

And right on cue… 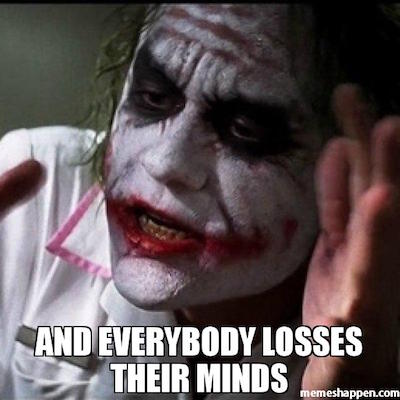 But really, when you think about it, whether you like HOW he was going about it, what Sheriff Joe was doing, was attempting to do his job, Protecting And Serving as well as he understood it.

How does that stack up against some of the things #44 pardoned? He was passing them out like Halloween candy.

Just look at some of the little monsters whose treat bag he filled up, too:

On one of his last days in office, he pardoned a whole stack of Cocaine dealers (how fitting), tax evasion, fraudsters, traffickers, and thieves. Even one guy who was ‘smelting coins’.

(But we really need to ‘throw the book’ at Sheriff Joe, right?)

Just before Christmas, he rubber-stamped relief to another stack of convicts. Mail tampering, lots of drug charges, including METH and HEROIN… not like either of THOSE are a problem in America these days.

This one stands out against his narrative:

Whatever happened to ‘if it saves just one life..?’ (cue tear)

Oh right, he no longer had to impress the voter. He was on his way out.

One guy… More than 100 KILOS of marijuana. Is that a big deal?

Possession of a stolen firearm…

Defrauding the government? Obama has friends who could probably have a job for ya!

Felon in possession of a firearm…

(I thought he opposed those!)

Last year it was wire fraud:

Does it seem strange that there are so VERY many wire fraud pardons… that, and embezzlement and mail tampering keep coming up again and again.

That and the drug trafficking.

But please… don’t pardon Sheriff Joe. No. That would be ‘bad for America’… somehow.

As you go further back in time, he didn’t pardon quite so many…

Armed bank robbery (an old case, but it was still armed BANK robbery).

What’s his fascination with such people?

And more importantly… why the open disdain of those whose only crime is voting Republican?