This student has been reported to the University he attends because another student was offended at his ‘wrong-think’ regarding ISIS. How Orwellian.

But I’m beginning to wonder if we’ve somehow entered the ‘1984’ that George Orwell wrote about.

A student at the University of Edinburgh has been accused of ‘Islamophobia’ for his political writings. The university is currently investigating the complaints.

Robbie Travers is a contributor to Gatestone Institute, a political writer, and a popular social media personality — almost 20,000 people follow him on Facebook.

He has been interviewed by the Clarion Project.

And the university isn’t looking into those Islamic students?

Because… that’s what I’d be doing.

But maybe they’re all just ‘Corbynites’ at the University of Edinburgh.

Travers was also reported for criticizing the hijab: 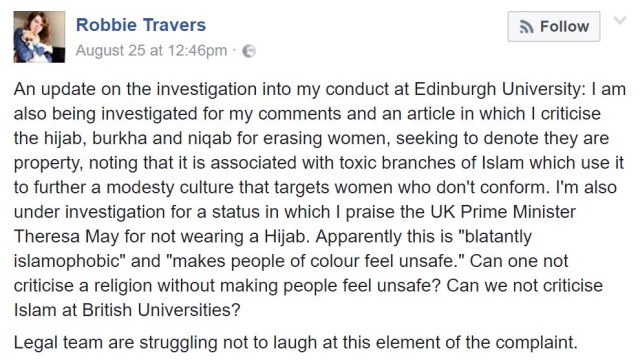 It looks like this university student is being targeted by those that want him to shut up.

And leftists hate it when you don’t fit the mold.

And a couple more complaints were filed when he said that Drag Queens should be permitted to perform at LGBT events — this was labeled ‘Transphobic’. 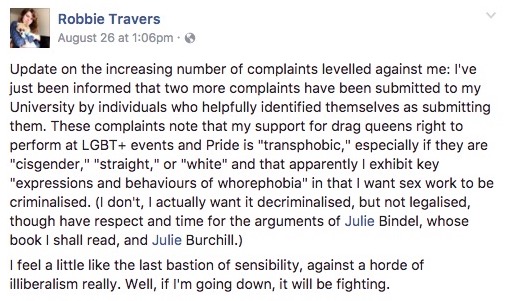 Who is the real liberal here?

So this bro is being ‘reported’ because of his insensitive comments?

Perhaps Travers is upset about the ‘insensitive’ ISIS practice of murdering gay people?

When ‘Islamophobia’ is attributed to any criticism of Islam — including a radical terrorist organization — it’s gone too far.

My suggestion for the Leftists at the University of Edinburgh:

Do you think that the University is right to open an investigation after these complaints have been made?

Do you think that Travers is being targeted for his opinions that fall outside of the accepted leftist dogma?