This is just sick. If the person guiding your career is telling you to do this, who do you trust?

Jazz Egger, an Austrian model started her modeling career at 13. She appeared on Germany’s Next Top Model and was a finalist in Elite Model Look. Egger has just turned 20.

Keep her age in mind as you continue reading.

Jazz has made a shocking claim: that models are pushed into prostitution to further their careers.

She said that even at elite modeling agencies, this practice is done in secret.

She came forward after she was harassed by a ‘partner client’ of the company and asked to meet with rich men and be ‘comfortable with the natural intimacy’ that would follow.

She was also told to keep quiet about it.

A young model has claimed prostitution is rife within the fashion industry after she was offered cash to sleep with wealthy men.

London-based model Jazz Egger, who recently turned 20, makes the extraordinary claim that ‘big agencies’ and ‘established models’ are involved in seedy underground dealings, with young women paid up to $2million (£1.54million) to spend the night with male clients.

Shockingly, Jazz claims she was even told that two young supermodels who have become household names have ‘spent time’ with men for money in order to get ahead in their career.

Jazz, who has 35,000 Instagram followers, also claims she has been told that one of the most established modeling agencies in the world was a ‘partner client’ of the company that had approached her for sex work.

She declined, but soon afterwards she was contacted by a second man who invited her to a private dinner with a ‘famous actor’ at a popular celebrity haunt – and advised that she would need to be comfortable with the ‘natural intimacy’ that followed.

When the then teen replied that she was ‘a model and not an escort’, she alleges the man – known only as George – shot back: ‘It’s the most normal thing in the industry, everyone does it.’

Check out some of the screen captures of the exchange: 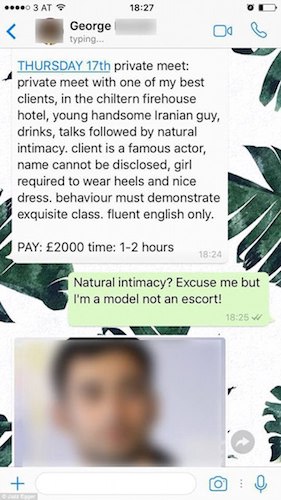 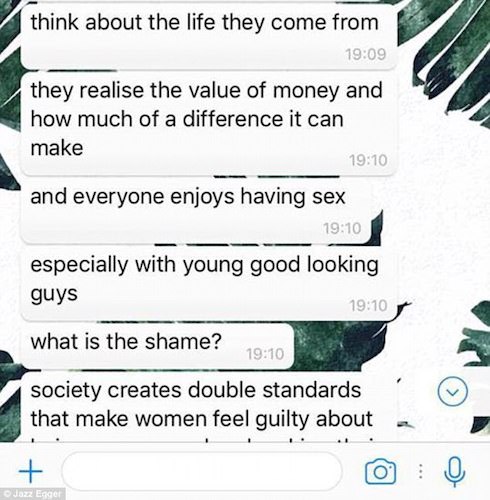 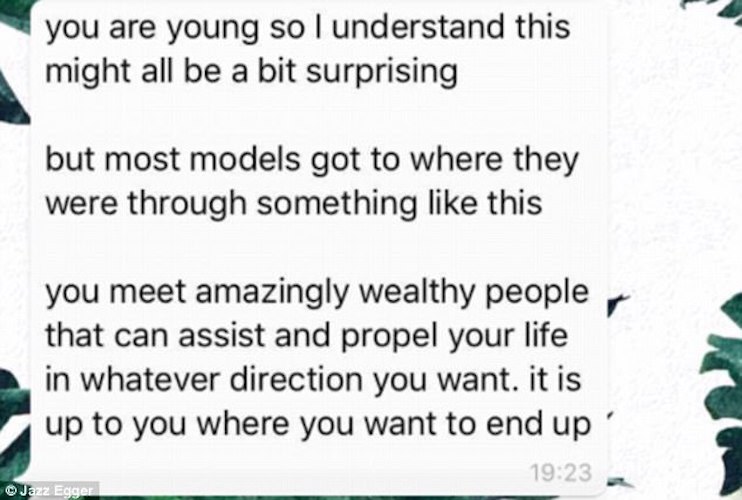 Jazz told MailOnline: ‘I would never sell my body in such a matter. I couldn’t combine it with my morals really.

‘I still respect those who do accept such offers. What made his offer highly questionable to me is that he asked me to keep quiet about it. This can’t be okay.

‘[George] reacted by spamming me with messages, in an attempt to convince me to accept his offer. It seemed like he was very experienced in that kind of conversation. He sent me screenshots of models who he allegedly worked with.’ 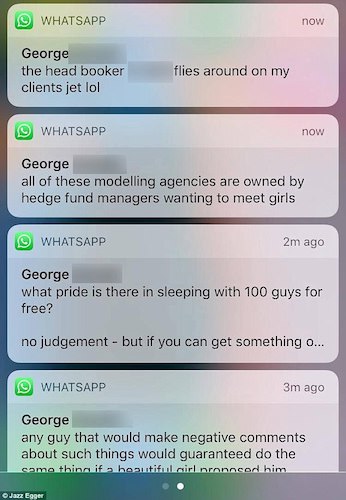 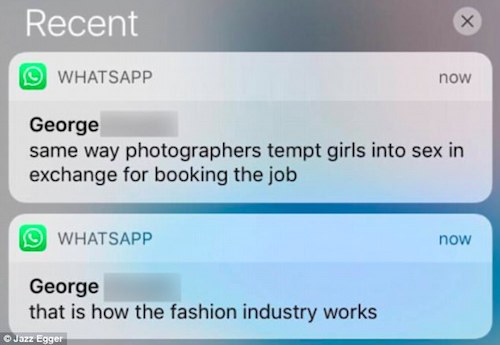 Jazz claims that ‘George’ showed her conversations with other girls saying that they were fine being pimped out.

Like this one from an alleged Cambridge University student: 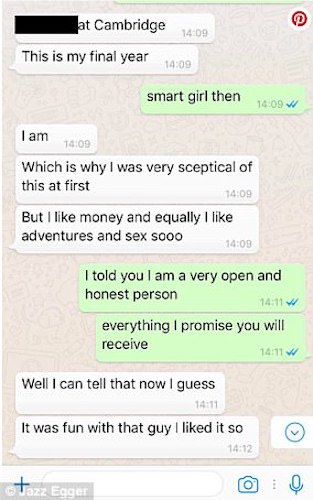 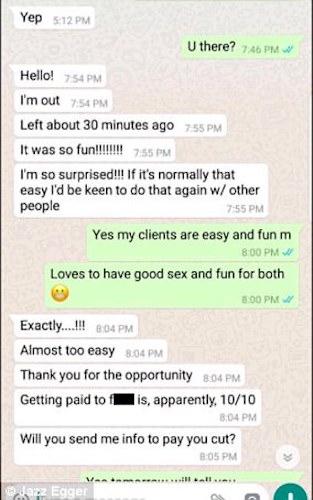 And in a 2015 report by OK! magazine, an industry insider said: ‘Wealthy businessmen will have someone reach out to agencies on their behalf to request appearances from these girls.

‘A private dinner can cost up to six figures, so of course the agencies take a cut. Don’t expect your trip to be entirely free though.

‘If you are lounging on a rich guy’s yacht and drinking his champagne, chances are something is expected of you – whether it is a kiss or a lot of time on the dance floor.’

Or maybe the time is not spent on the dance floor.

Modeling agencies are pimping their models.

And Jazz Egger was 19 when she was approached.

No-talent Kim Kardashian got her start with a sex tape.

Is this the world that we live in now?

Is this how attractive, young women are getting their start?

Is this why there is a push by feminists to normalize ‘sex work’?

Where is the outrage against ‘misogyny’ and the ‘patriarchy’?

When a woman has to sell her body to get ahead — that’s where feminists should be outraged.

But do you think they’ll say a thing about it?

Now take note of what a real women’s rights advocate looks like.

But Jazz Egger is determined to do whatever she can to stop the practice.

‘There’s so much wrong with this industry and I am going to do whatever it takes in order to change it. It might take centuries, but you have to start somewhere.’
Source: Daily Mail

Exposing the dark side of the industry is a fantastic first step.

What do you think of this sick practice?