It was supposed to be a sarcastic hypothetical.
The Left is trying their hardest to become too stupid to parody.

The same people who fought with all their strength to resist connecting any dots between domestic terror attacks like Fort Hood, The Pulse Night Club or San Bernardino and Islam are suddenly finding ways to link terror attacks in SPAIN to … Charlottesville?

ClashDaily’s Big Dawg threw out the question to Social Media last night. (Link will get you full context)

Notice the time stamp of the question: (’17 hours ago’ would have been about 7PM Eastern on Thursday.) 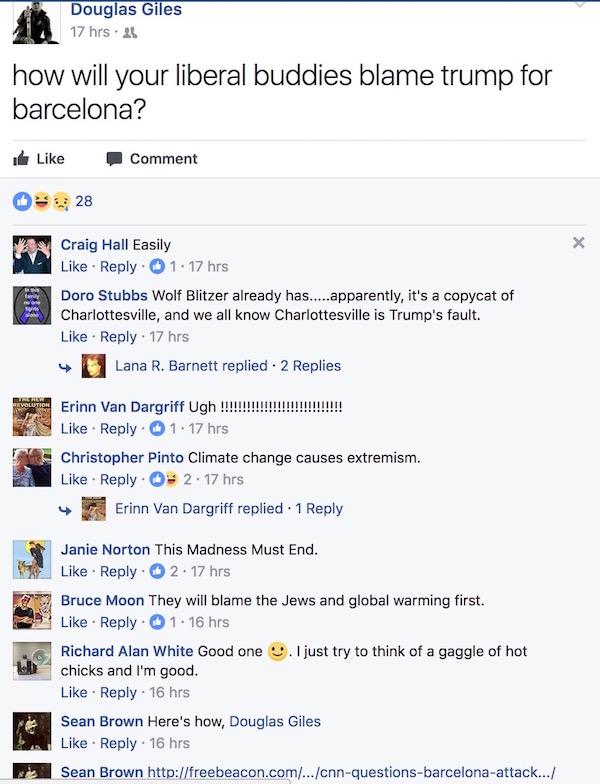 Wolf Blitzer reminds us why we call CNN fake news.

CNN host Wolf Blitzer said Thursday there would be questions if the Barcelona terror attack involving a van crashing into a group of people was a “copycat” of what happened in Charlottesville, Va.

…CNN national security correspondent Jim Sciutto said the “shared tactics” of the attackers in both instances was “alarming.”

“In light of the uproar of the last several days, five days apart you have a white supremacist in Charlottesville use a vehicle to kill, and here you have attackers at least following the modus operandi of terrorists using vehicles apparently to kill as well, and those shared tactics that should be alarming,” Sciutto said.

“There will be questions about copycats,” Blitzer said. “There will be questions if what happened in Barcelona was at all a copycat version of what happened in Charlottesville, Virginia. Even though there may be different characters, different political ambitions, they used the same killing device: a vehicle going at high speed into a group, a large group of pedestrians.” —FreeBeacon 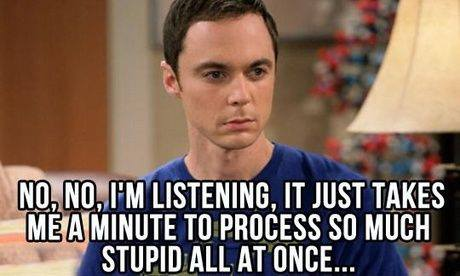 How shall we say this in word small enough for CNN employees to understand?

Barcelona had NOTHING to do with America.

It wasn’t copied. They didn’t even THINK about America.

They thought about their hatred for the Kafir (infidels).

They drew no ‘inspiration’ from Charlottesville.

We can prove it. Easily. With some of our own reporting.

Before we even knew which side did it, or why, we ran this headline:

By what possible logic could a CNN ‘journalist’ claim that an attack that was reported as having similar characteristics to a series of ISIS attacks?

Here’s a short list of recent ones, to jog their memory:

Was Trump responsible for all of THESE, too?

Watch: Here’s What Leftists & ISIS Have In Common

You saw no ‘connection’ between heated BLM rhetoric and violent chants against police when Dallas cops were murdered en masse by a white-hating racist.

You saw no ‘connection’ between Islam and the mass murder of men partying at ‘The Pulse’ nightclub. Despite the fact that Islam even today calls for their deaths, and the killer went to the mosque days earlier.

But you could find Trump in the Barcelona attacks?

One that involved killings on several occasions over two days? Including an exploding house, driving a truck OVER A CURB (not down an ordinary street filled with protesters), attacking female cops, and wearing mock bomb vests to keep police at bay?

That’s somehow a ‘copycat’ of events in VIRGINIA?

You are lying, Wolf. Pure and simple.

If you were wondering why journalists are not trusted, YOU are part of the problem:

The 23% who rated journalists’ honesty and ethical standards as “high” or “very high” this month is within a few points of the 20% who rated it “high” or “very high” in 1994. The percentage saying their honesty and ethical standards were “low” or “very low” climbed to 41%, 10 percentage points above the previous high of 31% measured in 2008 and 2009. In previous polls, more Americans rated journalists’ standards as “average.”

Twenty-one percent of Democrats rated journalists’ honesty and ethical standards as “low” or “very low,” compared with 63% of Republicans. –Gallup2016

In short, Wolf — stop being a presstitute, and start doing your damned job.