Five ‘drugged-up’ jihadis made a mess of yet another European restaurant district… And one lady cop went full BEAST MODE.

Why we can’t have nice things?

THIS is why we can’t have nice things: 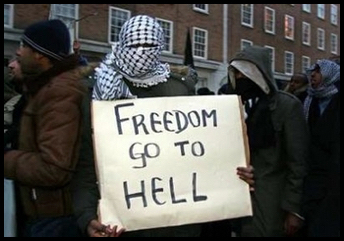 It’s hard to ‘meet someone halfway’ when their goals demand you either die or submit to their way of life.

So when the Spanish police faced down the Terrorists, they weren’t playing games.

If the only thing you’ve been hearing on the news involves Charlottesville and statues, here’s a quick video recap of the events of the day to get you up to speed:

Intense gunfire can be heard in the city of #Cambrils as an anti-terrorist operation continues near the city centre.pic.twitter.com/cK7AQaas52

Here is actual (graphic) footage of cops shooting down the guy taunting cops and shouting his little Islamic battle cry while wearing a fake bomb vest.

Of the Five Jihadis killed, one lady cop shot four of them dead.

A hero policewoman surrounded by drugged-up jihadis wearing ‘Coke can’ suicide vests killed four out of five of them herself and saved an injured colleague, it was revealed today.

The terrorists carrying knives and an axe bailed out of their overturned Audi A3 used to plough into crowds on the seafront in Cambrils on the Costa Dorada at 1am today, killing one woman and injuring six more.

Two police officers were on a routine foot patrol on a roundabout when one was hit by the car and within seconds her partner pulled out a handgun and killed four of them as they charged her. —DailyMail

Police believe these several attacks were intended to be part of a larger plan.

One of the attackers had arrived from Morocco only days earlier. They were part of a ‘terror cell’ said to have 12 members.

It was not that long ago where we mentioned the thousands of young male ‘refugees’ arriving daily in Spain by boat across the Mediterranian.

Is anyone else thinking that Spain is looking like that 711 AD invasion all over again?