Would even Churchill be able to stir their hearts today?

The rousing speeches that rallied the men of Europe to stand against impossible odds in days gone by — and those who made them — have long since fallen silent.

And none have risen to take their place.

This map depicting how likely people are to stand and defend their country is not encouraging, either. 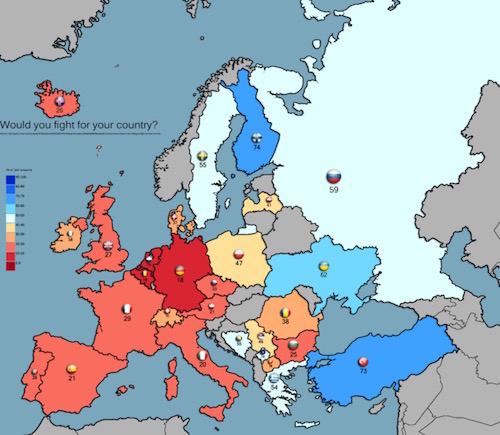 It’s a breakdown of the percentages of people willing to fight and go to war for their own countries.

From high to low, these are the percentages by country:

The numbers came from a Gallup poll.

Millions of men are pouring into Europe as ‘Migrants’. Not women and children. Not aged and infirm. Men, of fighting age.

Is it not possible that conflict is coming?

France and the UK are nuclear powers. That complicates things.

So where are the stout hearts that once defended the lands of their birth?

Have ‘Progressive’ doctrines of pacifism and sapped their strength?

Has a long period of peace made them too comfortable?

Has wealth and comfort made them soft?

Something made them soft.

Something made them change in a few short generations.

Is it something we face, here, as well?