It’s a good thing so many criminals are dumb.

It makes dealing with their law breaking so much simpler.

If they had thought this through the way you (are supposed to) do before launching a business venture, they would have just stayed home.

Rob a bar, they said.

How about you take a closer look at the patrons of the bar and ask yourself why so many have regulation haircuts?

Situational awareness was not their strong suit. And it cost them.

Police in Woodlawn, Maryland, arrested Joseph McInnis III, 21, and Tyree McCoy, 22, after the pair walked into Monaghan’s Pub waving guns and demanding money from the cash register. The suspects grabbed the cash and ran out of the bar, WBAL TV 11 reported.

Unfortunately for the would-be crooks, the bar was filled with police officers attending a retirement party for Sergeant David Neral, a nearly 30-year veteran Woodlawn police officer. After being robbed at gunpoint, the employees quickly told the officers what had happened.

Several officers then followed the thieves and detained the pair a few blocks away. —Breitbart 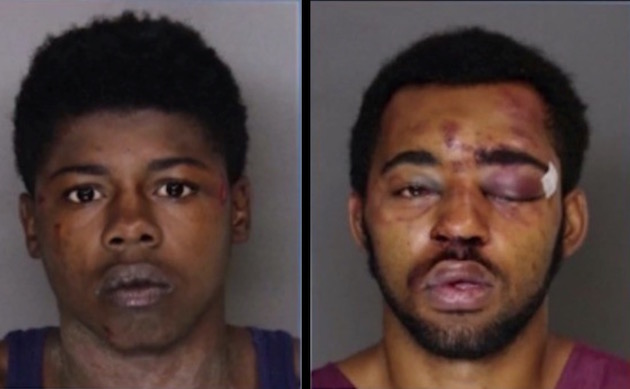 “I’m sure that they weren’t planning on there being a large room filled with police officers,” said Baltimore County police Officer Jennifer Peach told WBAL.

Bar owner Jack Milani said he was surprised anyone would be foolish enough to try and rob Monaghan’s Pub because it is a well-known hangout for local police officers.

Taking a look at the vacant look in their faces… this isn’t really so surprising.