Alyssa Milano is another one of those has-been celebs trying to kickstart her career and societal relevance by becoming a vocal member of the ‘Resistance’. This tweet was pretty disgusting, even for that crowd.

With the death toll at around 60, families, homes and livelihoods destroyed, and perhaps up to $180 Billion in damage from Hurrican Harvey, it’s in pretty poor taste to pick on those who were praying for the victims.

But, hey, Alyssa Milano is going to ‘Resist Trump’, even if it means mocking and cursing people of faith.

President Trump, as many presidents before him, called for a Day of Prayer in the wake of the devastating natural disaster.

Nothing weird about that, though many secularists and atheists have a real problem with it.

But Milano showed her disdain for people who pray for those affected by the hurricane. 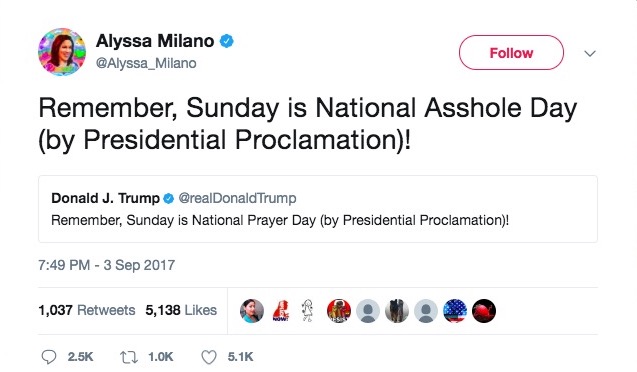 So she thinks that people who pray are @ssholes?

Did she have the same opinion of Barry’s National Day of Prayer or was that one ok?

Now, I’m not going to ‘literarily’ slap around Milano without also giving her kudos for writing a post on ‘Patriot Not Partisan’ about how people can help Hurricane Harvey victims.

Presumably, she made a donation if she’s putting the call out to others.

So, I’m not saying that she’s not doing anything or putting her money where her mouth is.

But then again, she is broke, didn’t cut her spending, and didn’t pay her taxes, so… there’s that.

And hey, we’re allowed to have differing political views, amirite?

But there is this weird thing going on now where leftists like Milano are in denial about the reality that Donald J. Trump is, in fact, the President — and that it wasn’t because of Russian hacking, it was because people voted for him.

And these same leftists vilify the President at every turn and mock his supporters — even the ones that reluctantly voted for him.

Although ‘tolerant’ Milano is totally cool with mocking and cursing people of prayer — remember #LoveTrumpsHate — she doesn’t say anything about Muslims praying 5 times a day because of their religion. That would, of course, be Islamophobic. So why treat other people of faith any differently?

Is Alyssa Milano a ‘prayerphobe’?

Is it really a good idea to make fun of people for simply having and observing their faith in the face of a disaster?

Is there no room for spiritual comfort?

Or is it because she thinks it’s the Deplorables on the ‘religious right’ that have a corner on prayer?

Who knows what rattles around in her little Hollywood brain.

But don’t worry, my friends. 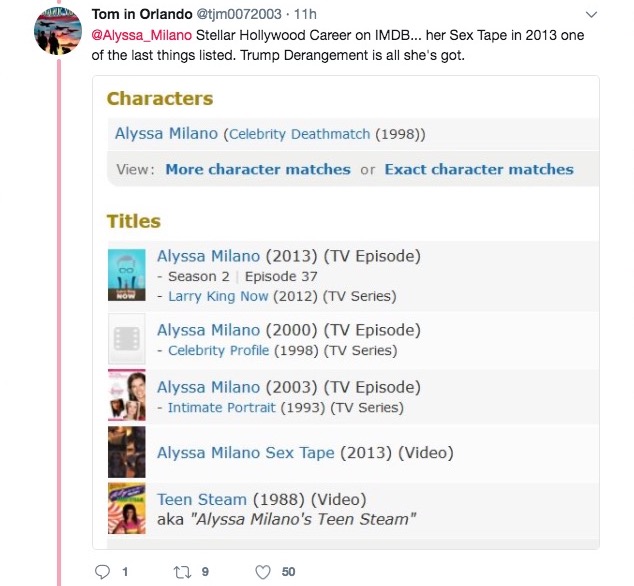