Just when Americans scrambling to recover from the hit they took from Hurricane Harvey, an even BIGGER one is charging down on us.

And there’s a chance it could charge right through to the Gulf.

Hurricane Irma strengthened into a powerful Category 5 storm on Tuesday, with sustained winds of up to 175 miles per hour.
Americans in Puerto Rico, the U.S. Virgin Islands and Florida are stocking up on supplies for a storm that’s expected to hit the Leeward Islands first on Tuesday or Wednesday.
Florida Governor Rick Scott declared the state of emergency for all 67 counties in the state on Monday after some forecasts showed the powerful storm could be headed for the East Coast.
‘Hurricane Irma is a major and life-threatening storm and Florida must be prepared. I have continued to be briefed by the Florida Division of Emergency Management on Hurricane Irma and current forecast models have Florida in Irma’s path – potentially impacting millions of Floridians,’ Scott said. —DailyMail

For a point of reference… Hurricane Katrina’s highest sustained wind speeds were 175 mph.

This storm is no minor threat.

And as of Tuesday morning, here are the projections: 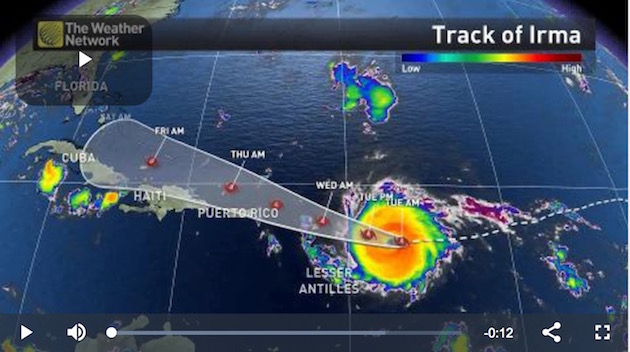 It’s barreling down toward Cuba and Florida.

Everything changes if and when it makes landfall, which will weaken the system. It could strike Cuba, which could drop its strength by several categories.

“Irma will likely have a major, potentially catastrophic, impact on south Florida and the Florida Keys this weekend and into early next week,” Gillham says. “However, increasing threat for Irma to make landfall across Cuba with catastrophic impacts if that occurs.” —Weather Network

Once it approaches Florida, there is little agreement in the computer models.

It could cross straight into the Gulf — which would be horrible news for those still trying to recover from Harvey.

Or it might take a sharp right turn up the Florida coast.

At this point, it’s too early to know.

If you are in any of the affected areas, it would be a good idea to start preparing for what’s coming.