What does a rescuer do when he gets in trouble? He calls in the Bros!

We’ve already told the story about how sportsmen (and other manly men) are suddenly no longer ‘the enemy’ at a time like this. The step up and people remember why they are appreciated.

Today’s story kicks that principle up a notch.

An army truck got stuck. So what are you supposed to do then?

Look for someone whose truck has a bumper sticker like this one: 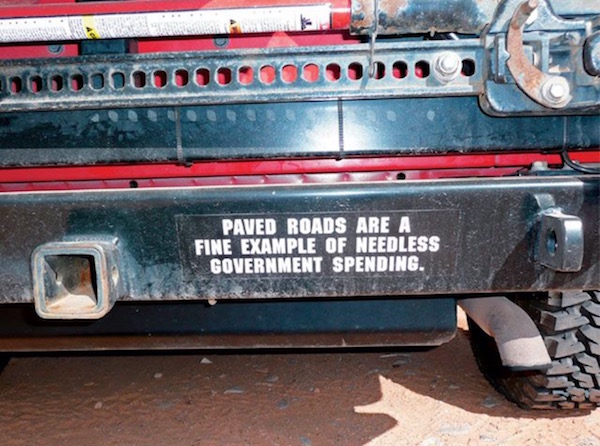 Call these guys in their homebrew version of ‘high water vehicles’.

A Houston mechanic has come up with a novel way of rescuing people caught up in Hurricane Harvey – by using monster trucks.
A video showing a US Army vehicle being dragged out of the water by an SUV with huge wheels fitted to it has been viewed thousands of times.
Crowds cheered as it emerged from the water. –DailyMail

We’ve got you covered.

That was just one of many such rescues.

Check out some of the trucks that have shown up to help.

The rescue was carried out by one of five monster trucks in a mission organised by airport worker Josh James, who told ABC News: ‘When people need help and I can help, I’m out there.’
James, 26, and his team of volunteers, from the Rednecks with Paychecks dirt racetrack, also helped save people in an apartment complex in the Copperfield area of Houston.
The trucks have been helping first responders get to places emergency vehicles cannot reach.-DailyMail

I’ve not seen a single Prius or ‘smart car’ doing the same thing.

Why is that, do you think?