The shoe is on the other foot now, Media (D)
How does it feel to be called out after justifying a terrorist group for so long?

Not that we’re expecting you to feel shame for it (if you are even capable of it).

We still remember the way you defended Linda Sarsour and her Hamas-friendly statements. This is what she said about a woman, FGM victim, and former Muslim who is critical of Islam she disagreed with: 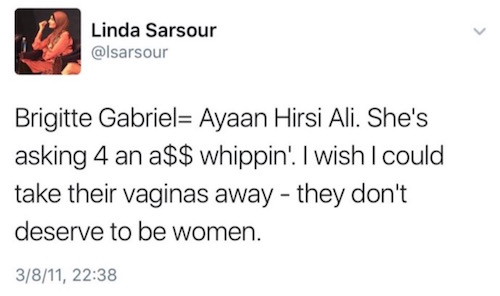 Yeah, great judgment they’ve got there.

Homeland security has weighed in on Antifa. They’re being called out as a Terrorist Group.

Federal authorities have been warning state and local officials since early 2016 that leftist extremists known as “antifa” had become increasingly confrontational and dangerous, so much so that the Department of Homeland Security formally classified their activities as “domestic terrorist violence,” according to interviews and confidential law enforcement documents obtained by POLITICO.
…Previously unreported documents disclose that by April 2016, authorities believed that “anarchist extremists” were the primary instigators of violence at public rallies against a range of targets. They were blamed by authorities for attacks on the police, government and political institutions, along with symbols of “the capitalist system,” racism, social injustice and fascism, according to a confidential 2016 joint intelligence assessment by DHS and the FBI.–Politico

But all this time, the media reflexively defended Antifa and related anarchist groups like BAMN simply because they shared the Democrat agenda.

The evidence shows that Antifa was a part of the violence there.

If that one moron in the car hadn’t crashed a crowd, the macing, physical conflicts and the infamous photo of the stand-off between the flag and the fire would still be newsworthy, and all anyone was talking about for days.

Even in the conflict point with the makeshift flamethrower, the news told a somewhat different story than the video did.

What was the news of the week that followed? Everything focused on the complaint that Trump called out ‘violence on both sides’.

The President was Hammered when he called out the ‘Alt-Left’ for violence. Not during his speech itself, but during the Q&A that followed, when reporters pressed him for not denouncing white supremacists ‘enough’.

(Whatever ‘enough’ would be.)

This fed their baseless narrative of Trump is a ‘Nazi sympathizer’.

How DARE he say both sides!

Which had those of us on the right asking… why are you so afraid to denounce people who have been wearing masks, throwing bricks, making improvised grenades with wine bottles and quarter-sticks of dynamite, breaking skulls with bike locks and generally making life miserable for law abiding citizens?

CNN even got called out on their headline which seemed as though it supported Antifa’s violence:

CNN published an article today based on interviews with members of Antifa. The headline notes, “Activists seek peace through violence.” That seems to suggest there’s a real problem with what Antifa is doing but the rest of the article comes across as sympathetic to the group, even to their violence:
…CNN notes their Antifa source is “echoing” John Adams. Adams included the phrase “a government of laws and not of men” in the Massachusetts Constitution. His point was that no king or autocrat would determine what was legal or illegal. Instead, the government would operate based on laws which applied to everyone equally.–HotAir

Not for the first time, and probably not for the last, the attacks being leveled at Trump are turning back upon his accusors.

Suddenly CNN and others will have to explain why they were ADAMANT in demanding denunciation of KKK by the right but were deliberately ignoring the people who do things like this:

#BPD is asking individuals to refrain from throwing urine, bottles and other harmful projectiles at our officers.

Have a look at the guys the Left are defending, while complaining about a Russian ‘threat to democracy’:

Let’s single out the spin on Acosta’s twitter feed for an example:

Fact check: what happened in Charlottesville was very clearly started by neo-Nazis and white supremacists. https://t.co/8tCuyfDB6w

Actually, that is specifically true of Jim Acosta himself. Even when incident after incident in Seattle, Boston, Berkeley are specifically instigated by black-mask-wearing Antifa thugs who take pleasure in violence and property damage to advance their politcal agenda. That is the classic definition domestic terrorism.

I asked POTUS why he didn't condemn the hate groups sooner. He responded: "they have been condemned."

Is Jim Acosta ready to concede that Antifa is a hate group now?

Note the President using the term "many sides." Given the chance, he didn't condemn these white supremacists and neo-Nazis by name. https://t.co/SiBDqGCwYv

Nor did he name ‘Antifa’. But he could have named both, and gotten it right.

These are the consequences of sanitizing white supremacists who seek to be rebranded as part of American "right." They are peddling hatred.

By your own definitions…

CNN and their complicit media buddies that have been sanitizing (and in the case of The New Yorker, even Romanticizing) Antifa’s criminal thuggery.

So by Acosta’s definitions, they are all ‘peddling’… what, exactly?

The good news is, the ones who are paid to show up and break things will have their funding disrupted. At least until they put together a work-around.