Every time ‘Mad Maxine’ opens up her mouth, the average IQ of her audience drops three points.

The same woman who is considered one of the ‘Most Corrupt’ in Congress and was a fan of Fidel Castro is endlessly ranting against everyone and everything connected to Trump. As racist.

She even linked Ben Carson — somehow — to her Trump-is-Racist rant.

She also brought anti-Jewish… which, if she has any idea what her own party’s stance on BDM is, or the fact that Trump’s Son-in-law is Jewish — she might want to rethink casting that particular stone.

But nobody called her a Mensa Candidate.

In fact, quite the opposite.

There’s a meme going around that puts this in its proper perspective. 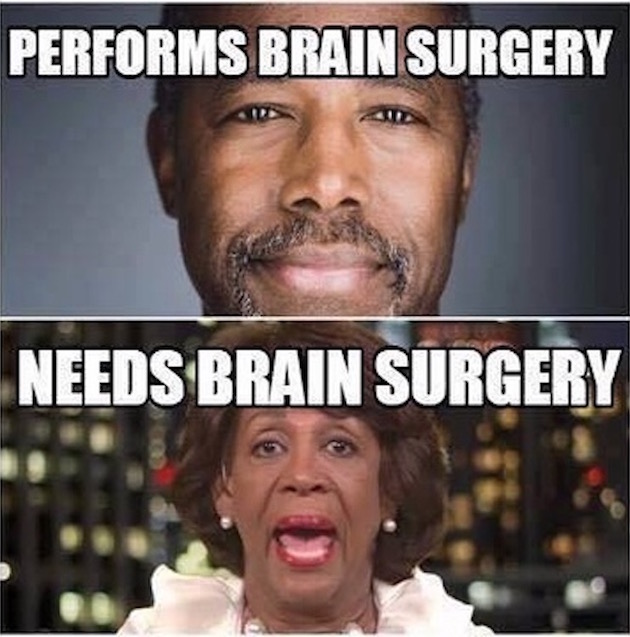 Here is a clip about the woman who tried to PERSONALLY cash in on the Government bank bailouts ranting incoherantly about Mnuchin and Carson.

‘There’s SO much uncertainty’ now that Trump is in charge.

She slammed Mnuchin and laid ‘36,000’ foreclosures in ‘this area’ at his feet, personally.

She wandered into her usual ranting about Alt-right-racist-KKK blah-blah-blah… and then invoked Ben Carson’s name in the middle of that somehow.

Maybe she’s never MET Carson? He’s a pretty unlikely candidate for ‘white supremacist’, I think he falls short on one or two of their entrance criteria.

Or maybe she buys into that Chelsea Handler BS about black-white-supremacists.