This would be a crippling blow for Leftist agitator groups and their movement as a whole.

The petition for labeling Antifa a terrorist group got big enough that it hit the needed signatures to be taken seriously.

The Soros petition is already getting close!

Here is the text of the petition:

Whereas George Soros has willfully and on an ongoing basis attempted to destabilize and otherwise commit acts of sedition against the United States and its citizens, has created and funded dozens (and probably hundreds) of discrete organizations whose sole purpose is to apply Alinsky model terrorist tactics to facilitate the collapse of the systems and Constitutional government of the United State, and has developed unhealthy and undue influence over the entire Democrat Party and a large portion of the US Federal government, the DOJ should immediately declare George Soros and all of his organizations and staff members to be domestic terrorists, and have all of his personal an organizational wealth and assets seized under Civil Asset Forfeiture law.

And it’s already getting close. As of noon (Eastern) on Friday: 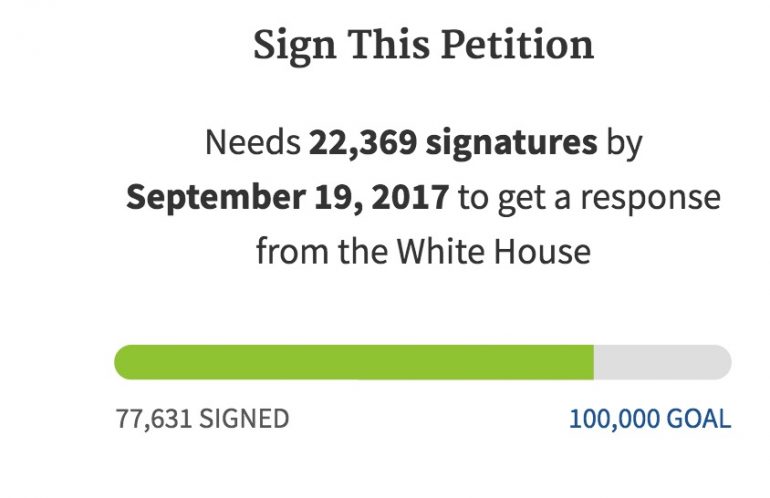 The Liberals would absolutely lose their minds over this.

So would the media.

Why did BLM pop up out of nowhere to push their narrative? Soros money played a big part.

Why are journalists so ‘devoutly’ hard-left?

He is a market manipulator, destroying economies of entire nations for personal profit:

When hedge fund billionaire George Soros makes a big trade based on his contrarian economic views, investors pay attention. After all, it was Soros’ Quantum Fund that made an estimated $1.5 billion in the early 1990s betting that the breakdown of a predecessor currency to Euro would force the Bank of England to devalue the British Pound. — Forbes

He is openly amoral. Even in hindsight, he doesn’t even regret confiscating the property of Jews condemned to Nazi Death Camps. If not him, it would have been someone else.

When [Soros] was asked by South Africa … how to protect themselves against [other market manipulators] like [himself], his answer included the phrase:

‘How to reduce exposure to speculative attack.’

[Side note: We are used to thinking of military or even cyber attacks on a nation, but we seldom discuss the financial threat someone like Soros could wield.]

You hear his amoral pragmatism when he’s asked about that answer. ‘Whether I do it, or somebody else does it, there is really no difference in the outcome. I don’t feel guilty, because I am engaged in an amoral activity which is not meant to have anything to do with guilt.’

Nice guy, eh? This is the Democrat’s biggest Sugar Daddy. This guy is – by orders of magnitude – a bigger financial contributor than the ‘dreaded’ Koch Brothers.

Soros was running hedge funds based in the Antilles to avoid scrutiny from the Securities and Exchange Commission.

But at the same time was saying Hedge Funds need more oversight to stop global crises.

Because you find it convenient to avoid regulation? ‘Yes.’

He is an unrepentant Nazi collaborator.

He is financing (and therefore influencing) the press.

He collapses economies and doesn’t care about the harm he causes.

If you really believe that is what ‘philanthropy’ looks like, you are wrong.

And he’s in bed with the American Left. Are we really surprised that our politics are becoming so toxic?

Is he the REAL origin of the ‘resist’ movements?

Would that explain why all the news outlets and the Democrats seem to have the same things to say day after day?

Would America be much better off without Soros money skewing our politics?