President Trump’s latest tweets after the 5th terror attack in the United Kingdom this year is making Leftists go crazy — but is he right?

No matter what the President says, you know it’s going to trigger somebody.

He could say the sky is blue and dissenters would protest in the streets with signs and weird hats chanting, ‘Hey-hey, ho-ho!  The sky’s cerulean doncha know!‘   CNN would have 36 hours of coverage on why the sky isn’t blue.

Don’t believe me?  ‘The Most Trusted Name In News’ made a big deal about how many scoops of ice cream the President gets.  In my book, President Trump should get as much ice cream as he wants from saving us from enduring a Hillary administration.  He should open up one of his Trump Ice Cream shops — or better yet, a Ben and Jerry’s — at the White House with a sign that reads, ‘President Trump eats here for free‘.

So, what did he say this time that’s got pretty much everyone on the Left up in arms?

Another attack in London by a loser terrorist.These are sick and demented people who were in the sights of Scotland Yard. Must be proactive!

Loser terrorists must be dealt with in a much tougher manner.The internet is their main recruitment tool which we must cut off & use better!

Um… yeah, this is a real problem.

Twitter users on Friday morning said a “bag exploded” on a train at Parsons Green, a station on the District Line in west London. The police say the object was an improvised explosive device.

In his tweets, Trump called for dealing with terrorists “in a much tougher manner,” such as cutting off internet recruitment.

Meanwhile, the leftist internet censors are targeting conservatives and making sure everyone agrees with the ‘accepted’ political ideology on gender pronouns and bathroom usage, etc. — if you don’t, then these days, you’re probably a ‘Nazi’. 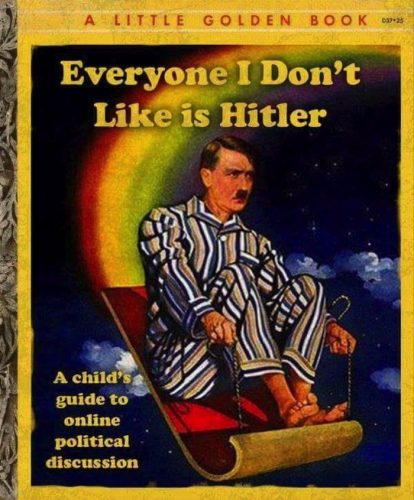 Of course the Media (D) doesn’t understand that their hypocrisy on censorship means it’s ok to censor conservatives but not radical Islamic terrorists.  The Southern Poverty Law Center, which is about neither poverty nor law, has basically labeled anyone that they disagree with as a ‘hate group’ which they then track on their ‘Hate Map’.  And they’re seen as legit.

The president also addressed domestic and international security, tweeting about his controversial travel ban and the ongoing fight against the Islamic State.
Source: Business Insider

And a tweet that really made Leftists in the Media (D) freak out:

The travel ban into the United States should be far larger, tougher and more specific-but stupidly, that would not be politically correct!

Allowing anyone to come into the country without proper vetting leaves you open to terror attacks.

Many of the attacks that are occurring in Europe are committed by ‘refugees’.

But the Leftists are committed to their ‘open borders’ and don’t want to see the connection.

The countries on the temporary travel ban are ones that have a high risk of terror. Does that mean everyone there is a terrorist? No. The issue is that we don’t have a fool-proof way of determining who is a threat and who isn’t, and until we do, we restrict travel for a brief period of time.

The politically correct leftists are quick to say ‘not all Muslims’ — and when they say that about terror, they’re right. There are also groups that the left quickly vilifies — for example, Pro-Lifers, Christians, social conservatives, fiscal conservatives, anyone that believes in enforcing immigration law, and on and on.

The cancer of political correctness has gone too far and has made it hard to enforce laws that would help us stop these terror attacks from occurring in the West.

We really need to suck it up and do what needs to be done, just like President Trump says.