If he’d rather attend his students’ funerals than their graduation, is he REALLY fit to teach them at all?

This is the sort of scumbag that is populating our colleges now.

Is there any wonder so many are coming out of school as messed up SJWs?

Here is the Tweet that has him in trouble…

Naturally, it has since been removed. But you can see what sort of person he might be with some of his other tweets. 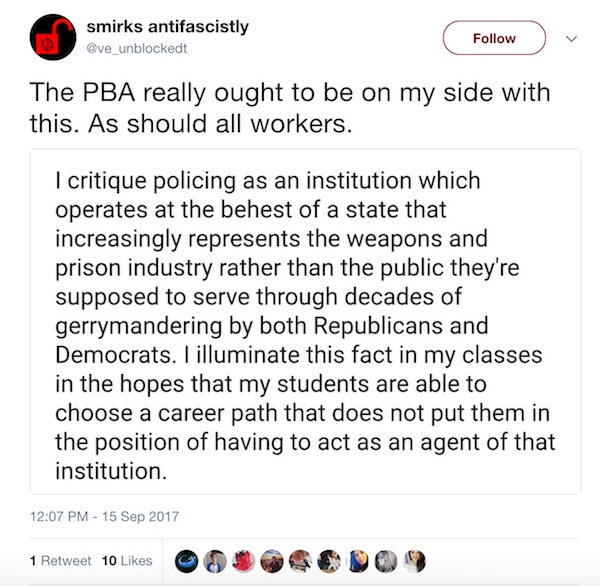 He also opened a chapter of Antifa, entitled Smash DC.

idk if he consulted anyone before sending this out, but he really should have because he messed up big (thread to follow) https://t.co/nlAnZeu9gy

He also retweeted this video about Black Block clashing with police in Paris.

This is the sort of person we want teaching our youth, including future cops, right?

Well, of COURSE, they were offended. They should be!

Does this not ‘privilege to teach future dead cops’ sound like an endorsement of violence — up to and including lethal force?

And he’s teaching at a College For Criminal Justice.

(We covered his appearance on Tucker Carleson’s show here)

Mr. Sensitive here said this a little more than a month after the murder of Miosotis Familia.

Classy. Maybe he cheers the murder of that young black mother, too.

Because she was a cop.

Should he keep his teaching gig, or be sent packing?

Prof Thinks 'It's A Privilege To Teach Future DEAD Cops' - Should He Be FIRED?