Hillary moved a massive amount out of her campaign funds and guess where it’s going?

In May 2017, Hillary created a Super PAC called Onward Together that was partnering with five left-wing groups: Indivisible, Swing Left, Color of Change, Emerge America and Run for Something.

It seems that Hillary’s new group is all about fundraising, and it’s going to the #Resistance.

It’s one of those ‘dark money’ groups that Hillary railed against as a Presidential candidate.

But here she is doing the very thing she complained about.

She transferred hundreds of thousands of dollars from her campaign run to Onward Together.

Clinton transferred $800,000 from her failed 2016 presidential campaign to Onward Together shortly before announcing the group’s launch in May, documents the campaign filed with the FEC reveal.

It seems that Onward Together is assisting in funding a particular part of the #Resistance — the violent so-called ‘antifa’ segment.

The website is unclear what they are using the donations for, however.

But four months later, it’s unclear what the group’s donors have to show for their money. Onward Together’s website still has just two tabs: one explaining the group’s mission and one asking supporters for donations.

An email signed by Clinton asking supporters for money last week excused her group’s lack of action. “You may not have heard much about the work we’re doing at Onward Together,” Clinton wrote. “That’s because we’re working behind the scene to fund, support, and amplify the work of the groups we’re supporting. We’re not the story: they are.” She closed the email by asking supporters to commit to a recurring monthly donation. 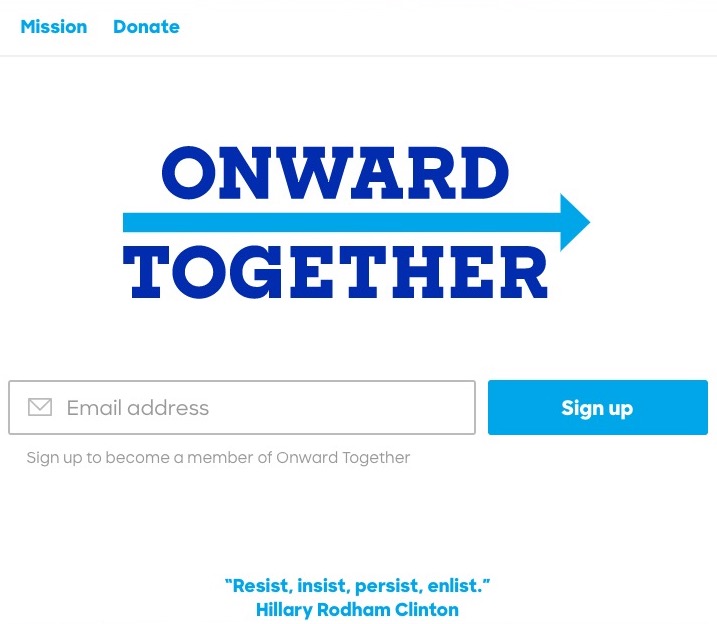 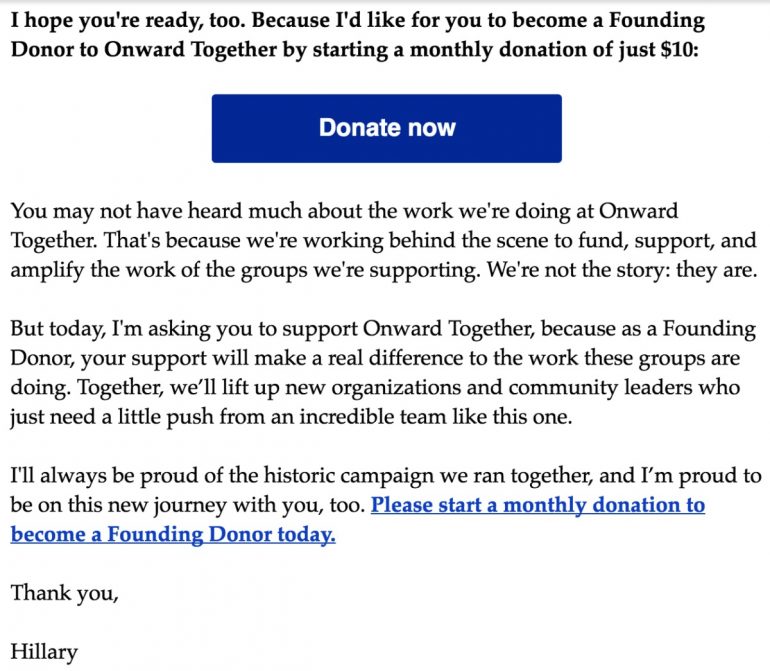 So, let’s take a look at the five groups that Onward Together supports.

Run For Something is a group that does the same as Emerge America, but not just for women, this one is targeted at Millenials.

Swing Left seems to be an innocuous site more about pushing forward their agenda through voter mobilization.

Color of Change is a racial justice group that promotes civil rights and often joins with Black Lives Matter, which has been known to foment violence and rioting at their protests once it gets dark.

That all looks fairly innocuous except for maybe the connection to BLM, right?

To Punch Or Not To Punch and In Defense Of Violence At Berkeley and they sell swag on their site — BLM shirts, ‘Not My President’ shirts, and one with President Trump’s face with ‘Hater’ covering his eyes.

And these folks are everywhere.

Onward Together is registered as a 501(c)4 so it isn’t required to reveal the identity of its donors.

As a 501(c)4 “social welfare” organization, Onward Together isn’t required to reveal the identity of its donors, something the group has confirmed it will not be doing.

As a presidential candidate, Clinton railed against “dark money” groups like Onward Together.
Source: Daily Caller

What do you think of Hillary’s new Super PAC funding the violent ‘resistance’?