Do you remember this? Seems like CNN and the rest of the Media (D) doesn’t.

Although CNN had just last Thursday run a documentary commemorating the anniversary of the forced deportation of a young would-be ‘Dreamer’, they fail to see that their own biases are at play.

Last month marked 17 years since little 6-year old Elian Gonzalez was taken from his family’s home in a late-night federal raid — with agents armed to the teeth — to be deported to Cuba.

It was an image seen around the world. 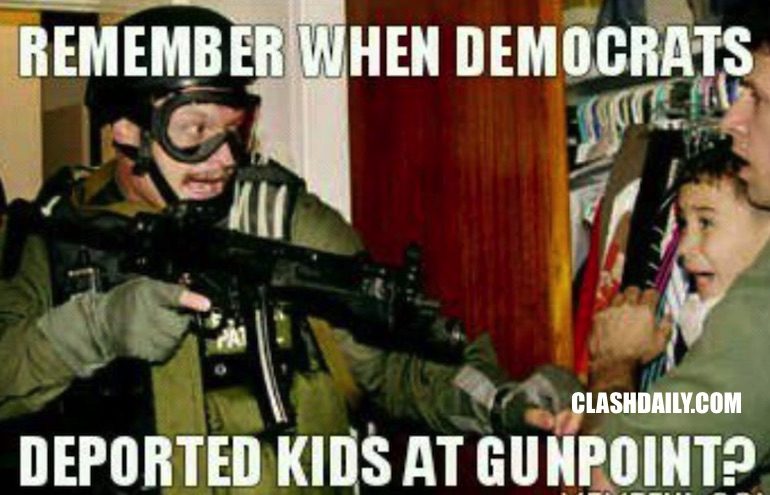 Deporting kids back to Cuba is different than sending them back to Mexico and South America for some reason.

Barry was soft on Castro’s regime. We had a ‘Cuban Reset’ if you will.

US law — until Obama nixed it — said that Cubans fleeing the Communist regime would be granted permanent residency status if they had ‘one foot’ on American soil.

“By taking this step, we are treating Cuban migrants the same way we treat migrants from other countries,” Obama wrote in a statement Thursday.

“The United States, a land of immigrants, has been enriched by the contributions of Cuban-Americans for more than a century,” he continued. “Since I took office, we have put the Cuban-American community at the center of our policies. With this change we will continue to welcome Cubans as we welcome immigrants from other nations, consistent with our laws.”
Source: CNN

Did Obama just say that we are to treat all immigrants equally ‘consistent with our laws’?

Somebody tell all those ‘Sanctuary City’ nuts.

They probably won’t understand, though.

Elian’s Miami relatives argued if the boy went back to Cuba, he would become a brainwashed trophy for Castro in his long-running feud with the US.

As the two sides fought out the high-profile case in court, U.S. immigration officials decided to put Elian in the custody of his father, who had come to the United States to press for his son’s return.

Elian is now 23 and a solid communist. He believes in the ‘Revolution’ and is joining the Cuban army.

He also blames the United States for the many Cubans that take their lives in their hands — like his mother did — to flee.

But hey, it’s not like he was ‘used politically’ like he claims he would have been in the United States.

At his seventh birthday party, the guest of honor was Cuban leader Fidel Castro. Images of Elian and Castro celebrating were first shown on the island’s state-run TV and then transmitted around the world, to a public still fascinated by the case of the rafter-boy.

“I don’t profess to have any religion, but if I did my God would be Fidel Castro. He is like a ship that knew to take his crew on the right path,” Gonzalez said in an interview with Cuba’s state-run media in 2013.
Source: CNN

Yep. That’s not brainwashing at all.

Good thing that the Democrats protected this child in a terrifying way at gunpoint in the middle of the night.

After all, look at the young man he’s become. He’s a staunch supporter of the ‘Revolution’ that jailed thousands of political dissidents and, between 1959 and 1987, killed somewhere in the range of 35,000 to 141,000 citizens.