Dennis Rodman has a weird friendship with North Korean dictator Kim Jong-Un. Could he be an effective negotiator for peace?

Straight up, Dennis Rodman is weird.

He’s had freaky colored hair, piercings, and tattoos before all of that became mainstream.

He’s been fine wearing women’s clothes out in public.

Rodman even donned a wedding dress in 1996 to say that he was ‘marrying the State of New York’. 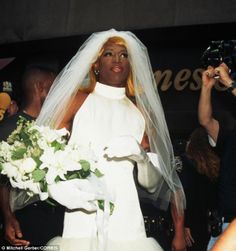 And yet, he still managed to marry Baywatch babe, Carmen Electra. It only lasted a year, and Electra says that it was ‘the worst’. Still…

The weirdest thing by far, however, is Rodman’s friendship with Kim Jong-Un.

The former NBA star has made several trips to North Korea to visit his ‘friend’.

1. Rodman and Kim Jong-Un are Friends and have been for years

The 56-year-old revealed the pair’s bizarre friendship this morning and believes their connection could lead to peace with the United States.

Speaking to Piers Morgan on ITV’s Good Morning Britain, the American said he has been friends with Mr Jong-un since 2013 but they ‘barely discuss politics’.

2. He was invited to North Korea because Kim Jong-Un was a fan

‘I think that’s a great connection for anyone in the world, it so happens it has to be me. He obviously likes the Chicago Bulls, he asked me to come over and I said yes.’

Mr Rodman said he has visited North Korea ‘six or seven’ times and gave an insight into what the pair get up to.
Source: Daily Mail

3. They hang out and do ‘cool stuff’ but don’t really ‘talk politics’

‘For me to go over there and see him as much as I have, I basically hang out with him all the time, we laugh, we sing karaoke, we do a lot of cool things together.

‘We ride horses, we hang out, we go skiing, we hardly ever talk politics and that’s the good thing about that.’

4. Rodman sees a different side of the dictator

He gives a very different picture than the saber-rattling madman hell-bent on war with America.

He added: ‘Every time I see him hes always calm, he’s always smiling especially when he’s around family.

‘If you see him just sit at a table he’s just like everybody else. I know he tries to be a dictator and a madman but I’ve never seen anybody in my life have that much power, if it’s good or bad.

‘It’s just fun that me saying something like that makes people say ‘oh my God i’m protecting North Korea’.
‘But it’s not like that. I’m just bringing sports to North Korea, I’ve always said I’m not about politics.

Not at all. I just go over there for sports. I’ve been there six or seven times.

Describing the relationship with the US, he added: ‘To me I think if the president even tries to reach out for Kim I think it will be a great possibility.

Rodman is dismissive of the oppressive regime and brushes it off as ‘not talking politics’.

When confronted with the conditions that North Koreans suffer under, he says he doesn’t defend his friend.

6. He is friends with both Donald Trump and Kim Jong-Un

Rodman was on Celebrity Apprentice and counts Trump as one of his friends.

He was fired for a spelling mistake of Melania’s name.

‘I’ve got to hope. I’ve got to hope that the fact that we can actually try to come have some type of happy medium around the world, especially here in America.

Could Dennis Rodman be the answer?

Or is Rodman delusional?

Is there any hope of diplomacy with North Korea?