Mad Maxine is at it again.
I guess she’s jealous about Chuck And Nancy hogging the Dem spotlight, and angry that they’re ‘playing nice’ with Trump.

If you were wondering what Liberal values look like, Maxine Waters can help us clear that right up… especially when we compare them against those ‘horrible, no good, very bad’ conservative values she likes to demonize.

Those of us on the right see people as distinct individuals with individual rights, dreams, hopes and challenges.

Every person has a unique value. Their triumphs and tragedies are their own, rather than a ‘shared experience’ because none of us truly knows the full scope of what another person has experienced, good or bad.

As such, the major milestones of that person’s life: whether education and business goals attained; community involvement; love, marriage, and building a family; and even their passing, are a celebration of that person, and those people with a real connection to them, directly or indirectly.

Which is why we — and most people — would see a eulogy as a moment to celebrate those things we loved best about the life of the person we were there to honor.

Liberals, on the other hand, see us as groups to be sorted and managed.

That is why they so often speak of issues based on the conflict between groups, with specific individuals only mentioned when they are useful as placeholders for those larger groups.

Dreamers are painted as ‘children’ (does CNN ever acknowledge the oldest of them are now thirty-six?) ‘who would suffer’ for conservative immigration policies.

Jimmy Kimmel mentions his kid’s heart surgery in the health care debate, as a means to a political end (even though Conservative Ben Shapiro’s kid was served by the very same surgeon for a similar issue, and he will instead handle health care as an ISSUE weighed on its merits).

Maxine Waters, the Democratic Congresswoman who was named one of ‘the most corrupt members of Congress’, took the occasion of a eulogy to BLAST Trump.

I’m sure her words were very ‘comforting’ to the grieving family.

Well — truth be told, it’s hard to say how an activist would prefer to be remembered, but do you really think anyone there wanted the conversation dominated by Trump’s name?

What comforting words did she offer to the those gathered to remember Dick Gregory?

She gave a stump speech.

About HERSELF. About Trump. About impeachment.

“When I get through with Donald Trump, he’s gonna wish he’d been impeached.” 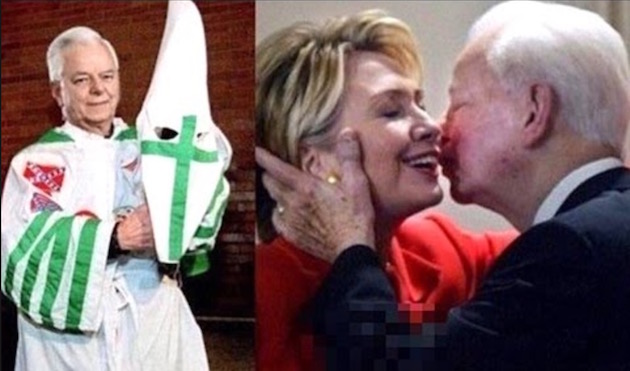 … which is a weird complaint from someone who supported Hillary as President.

Even if he would have backed her POLITICAL cause, do you really think he would offer his own eulogy as a stump speech for someone else?

Although Dick Gregory’s politics differ greatly from our own, we know that a person is valuable in his own right, and not as a means to a political objective.

Let Mad Maxine rant however she may about her own political aspirations. We will give the man the honor due him.

We realize ClashDaily isn’t an effective forum to write a proper tribute to the man, but for those who wish to remember him properly, we can link to one that does.

Because unlike Mad Maxine… we on the Right believe the individual has worth and dignity… whatever their politics.

Contrast her venomous rant to the glowing praise that KKKlansman Robert Byrd got at HIS eulogy which Clintons and Obamas both attended, and it should really give you pause.

What kind of a ghoul makes a vitriol-laden stump speech in that slot where a Eulogy belongs?

Oh, right. A Liberal one.