Strong opinions on all sides. Which one has it right?

We have already heard from those who bow to ‘Mother Earth’ about what lesson THEY think we should take from the battering of storms we have seen this summer.

Some have already blamed Trump. Others, Carbon Footprints.

Others, less ‘religious’ in their devotion might call it dumb luck. Miserable luck, sure, but luck, and nothing more.

And nothing can be learned from luck except how to prepare for the worst.

But there is one other sort of voice, with a different sort of lesson.

The voice of those who believe there is something greater than nature.

Kirk Cameron, once known for his starring role in Growing Pains, and who has since become associated with Christian programming and preaching, shared some highly controversial thoughts on the topic:

Kirk references a passage from the Book of Job, Chapter 37, in which he anchored his ideas, before speaking about what lessons he suggests might be taken from them. (The passage quoted is slightly longer than what he cited, for context, the full chapter can be read here.)

By the breath of God ice is given,
and the broad waters are frozen fast.
He loads the thick cloud with moisture;
the clouds scatter his lightning.
They turn around and around by his guidance,
to accomplish all that he commands them
on the face of the habitable world.
Whether for correction or for his land
or for love, he causes it to happen.
“Hear this, O Job;
stop and consider the wondrous works of God.
Do you know how God lays his command upon them
and causes the lightning of his cloud to shine?
Do you know the balancings[b] of the clouds,
the wondrous works of him who is perfect in knowledge,

He suggests that this is not ‘Mother nature in a bad mood’ but ‘a spectacular display of God’s power’.

Our response, Kirk says, should be ‘Humility, Awe, and Repentance’.

A reminder that God supplies us life, breath, and everything else, and we should return to Him.

Repentance and Humility are not a popular message in a time where moral relativism — if not moral anarchy — are they?

He has, predictably, enraged those who hate God anyway. He has also poked a number of Christians with a different view of tragedy with a pointy stick, too. 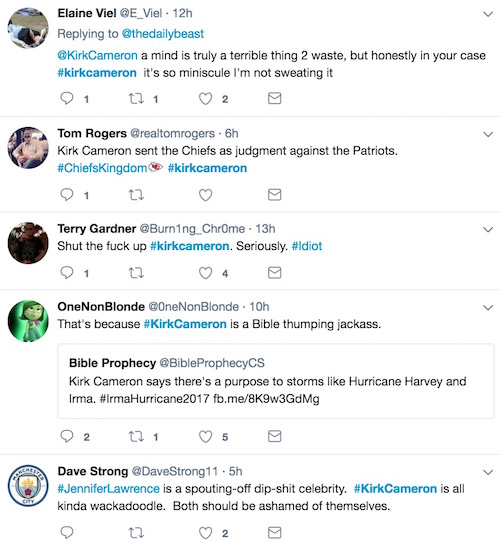 What’s YOUR take on the spike in dangerous storms lately? Weigh in in the comments.

By the way, if you think ‘sweet Jesus’ promised a life without ‘storms’ and struggle — weather or otherwise? You’d best think again.

Don’t miss the next one! Sign up for the podcast on your favorite platforms: