So, the ‘Patriot Prayer’ group had a rally. And guess who showed up?
They brought a little present for the police, too.

In Portland, where there have been several riots already this year, a group had a free speech rally.

Patriot Prayer is a group that the media is classifying as ‘Alt-right’ (implying they have common cause with that other group with their tiki torches in Charlottesville). FYI– Joey Gibson is JAPANESE. Are we really supposed to believe he’s got something in common with the morons in pointy white hats? 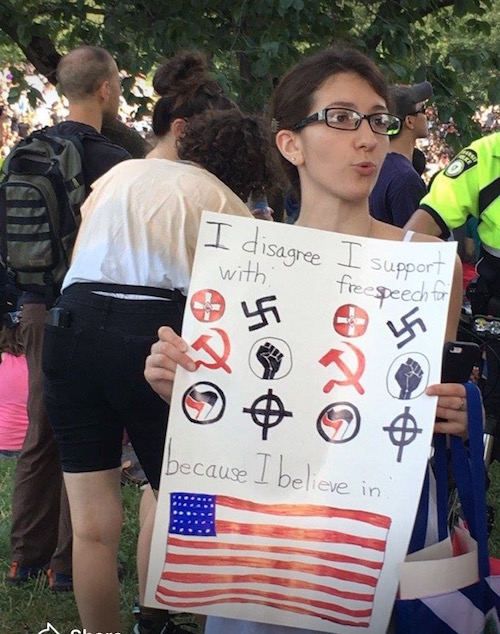 Is this what keeps media types up at night? What about what the movement’s leader said in this clip?

“It’s not about politics anymore… it’s about lack of respect.” You may have seen him on Tucker Carleson’s show, where he was a guest several times.

Meanwhile, Gibson said that he and an undisclosed number of Patriot Prayer members will show up in downtown Portland beginning around 12:30 p.m. Gibson said he will keep his hands in the air in a gesture of non-violent resistance and has asked those who will be with him to do the same.

However, he acknowledged that his presence alone may provoke an attack by counter-protesters, such as the one he faced at a rally in Berkeley, California last month.

“Either way, it’s a win-win for us,” Gibson said. “As long as we remain non-violent.” —OregonLive

You’d think the ‘love trumps hate’ people would be cheering for this guy! Nope. Not so much.

So, Antifa shows up to his protest… and what constructive addition did they bring to the conversation?

Two police officers were injured as protesters threw rocks and smoke bombs at police during the ‘Patriot Prayer’ rally.
Authorities in the city were preparing for violence at around noon as anticipation grew for a rally that was staged by the right-wing organization.
At around the same time, police made sure to create a buffer between Patriot Prayer and several hundred counter-protesters belonging to another group which demonstrated under the banner ‘Shut Down White Supremacy’. –DailyMail

They attack cops and complain that a Japanese man is a white supremacist.

This is the team so many Democrats are backing.

This is the same left-wing group the Media deflected attention from when our President dared to mention ‘alt-left’ violence.

Police in Portland, Oregon, made seven arrests Sunday as antifa radicals threw rocks and smoke bombs at officers, creating chaos even after a scheduled Patriot Prayer rally was moved to Washington state in a bid to avoid violence.
Portland police said two officers sustained minor injuries as protesters “threw rocks, irritant smoke bombs and other projectiles” at Terry Schrunk Free Speech Plaza, the site of an otherwise peaceful counterprotest dubbed the March Against White Nationalism.
The charges included disorderly conduct, theft, interfering with a police officer, assault on a police officer and harassment, according to the Portland Police Department.
The department also reported that photographers were being attacked by the antifa, the loose-knit “anti-fascist” groups known for their black masks and use of violence to shut down conservative speakers. –Washington Times

Maybe soon, the ‘mainstream’ media can figure out why the rest of us denounce them as terrorists.