“I have spent my entire career standing up to fascism,” he told the crowd. “Antifa is fascist. I am not a fascist.”

Violent Leftist thugs were arrested during a speech ABOUT Free Speech.
They claim to be ‘anti-white-supremacist’. Nobody said they were smart.

And Berkeley had to pay $600K for security!

(Have any Leftist events been so threatened that they needed more than half a million in security? No? Then maybe people on the RIGHT aren’t the violent ones.)

The long-awaited appearance at Berkeley has finally come.

The speaker was Ben Shapiro. He’s a young, high-profile Conservative, he was formerly an editor at Breitbart (which would make their claims of ‘racism’ hard to explain).

So… of all the conservative speakers that should be able to get ‘a pass’ from the ‘everyone I don’t like is a Nazi’ crowd, you might expect it to be Ben Shapiro… right? 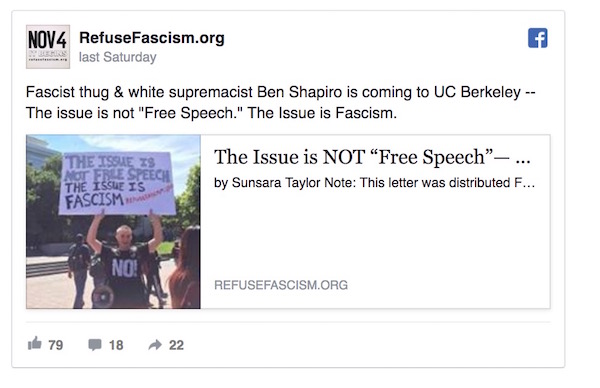 Forget the fact that the Antidefamation League called Shapiro the most racially-targeted Journalist in the US.

The Task Force identified that some 19,253 overtly anti-Semitic tweets were sent to at least 800 journalists in the U.S. during the 12 month study. The top 10 most targeted journalists – all of whom are Jewish – received 83 percent of those 19,253 tweets. The top 10 includes conservative columnist Ben Shapiro, Tablet’s Yair Rosenberg, the Atlantic’s Jeffrey Goldberg and The New York Times’ Jonathan Weisman, and CNN’s Sally Kohn and Jake Tapper.
—Daily Wire (emphasis added)

When analysts dug a little deeper, they found that white nationalists and the so-called Alt-Right, most of whom support Donald Trump, appears to be “disproportionately” engaged in the anti-Semitic attacks. The report underscores that the Trump campaign has not supported or endorsed the rhetoric:

The words that appear most frequently in the 1,600 Twitter attackers’ bios are “Trump,” “nationalist,” “conservative,” and “white.” To be clear: this does not imply that the Trump campaign supported or endorsed the anti-Semitic tweets, only that certain self-styled supporters sent these ugly messages. The data also illustrates the connectedness of the attackers: waves of anti-Semitic tweets tend to emerge from closely connected online “communities.” —Daily Wire

So, now that he spoke there (and now that Berkeley needed to spend $60K on security), what happened?

Nine people were arrested, four of them for carrying banned weapons. One was held on suspicion of battery on a police officer. Hundreds of law enforcement officers, many in riot gear, prepared for violence and seized potential weapons, but no major skirmishes were reported. Several shouting matches erupted but ended peacefully.

A campus spokesman said there is a “sense of relief” that the preparations worked and Shapiro’s speech went smoothly. At one point during the evening, police said, crowds swelled to about 1,000 people. —LATimes

… to silence a Jewish Speaker …

…in an effort to stamp out white supremacy

…might want to ask themselves if they’re truly intelligent enough to attend higher education.

It takes a special kind of stupid to call a Jewish man a ‘nazi’.