Hillary’s next book has come out. Will you read this one?

Her other book sales haven’t been as great as they were expected to be.

Her previous book, Stronger Together, was touted as ‘ A Blueprint for America’s Future’.

The book outlined her Presidential policy platform and was co-authored by her running mate, Tim Kaine.

It was a future that not many Americans wanted, however. We know that from her spectacular election loss, but perhaps she could’ve seen the writing on the wall when her book sat on the shelves unpurchased.

Illustrating that she just cannot learn from her mistakes, Hillary’s new book has been released and it’s titled ‘What Happened’. I’m sure the implied question mark was left off the end there for some unknown reason.

[We preferred some of our suggestions, but, hey, at least her title illustrates exactly the tone-deaf can’t-take-responsibility garbage candidate that Hillary was. Better than she did on the campaign trail, anyway.]

Hillary’s long list of who to blame for not winning the election includes, but is not limited to:

And she’s now added in young women that didn’t vote for her.

Hillary Clinton, in her campaign post-mortem released Tuesday, tore into women who didn’t vote for her failed presidential candidacy in November and regretted it, saying “these people were looking for absolution that I just couldn’t give.”…

…“Since November, more than two dozen women — of all ages, but mostly in their twenties — had approached me in restaurants, theaters, and stores to apologize for not voting or not doing more to help my campaign,” she writes. “I responded with forced smiles and tight nods.”
Source: Breitbart

As you can see, since her decision to become a ‘spiritual leader’ her language is taking on that flavor. As though women who didn’t vote for her somehow ‘sinned’ and need absolution.

It couldn’t have been that she really was a garbage candidate, could it?

Her constant blame-shifting is incredibly annoying.

The woman is the antithesis of what a strong woman should be. Feminists shouldn’t like this harpy.

She stayed with a man that humiliated her — publicly — by carrying on affair after affair including one with an intern while he was President. And she ‘stood by her man’. Why? She Persisted and stayed in the marriage for her own political advancement. What happened to making it on your own as a woman and not relying on a man?

She bullied the women that accused him of sexual assault — and that wasn’t for his benefit, it was for hers.

She doesn’t seem capable of telling the truth if her future depends on it.

She still can’t face the fact that America is just not that into her.

Do you really want to read this crap?

Or is being pummelled with oranges looking pretty good right now? 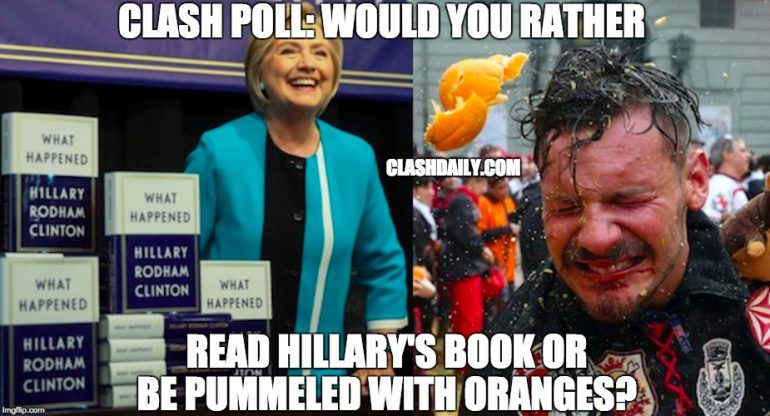 It’s not just the Hillary Clinton Blame Game™ that she covers in the book, it’s also this erudite ‘health’ advice:

She highly recommends it.

We’re supposed t listen to Hillary about how to be healthy?

Hillary, touting yoga as a means to good health is not a great endorsement of yoga.

She had a hacking cough all the way through the campaign, and we just commemorated the day she passed out in the sweltering 81-degree New York heat and got tossed into a van like a side of beef.

She wasn’t a great candidate and lost the election.

She stuck by an accused rapist to further her career.

Hillary is by far the most tone-deaf, blame-shifting person that I’ve ever seen. (And I have kids!)

Why should you care what she has to say now?

Do yourself a favor and pick this on up instead. Frankly, Hillary should give this one a read, too.

Yikes! Corn Prices Are Up Roughly 50% In 2021 As Americans Brace For Years Of Horrific Food Inflation
May 11th, 2021 DC Dirty Laundry