Which one is REALLY showing courage?
The team that takes a pass, or the ONE guy who wouldn’t?

*update*
Be sure to read down to the end where we added a powerful message to the NFL athletes from a Gold-Star Mom!
*end update*

The real displays of courage aren’t just seen in firemen, cops, and soldiers. It’s in doing the simple thing… doing what you know is right, regardless what the popular opinion would have you do.

McCain was criticized for doing the wrong thing on Health Insurance — for capitulating to media pressure and to his Left-leaning donors … despite any battlefield courage he may have shown ‘back in the day’.

Sometimes, real courage is seen in REFUSING to go along with the crowd… especially your friends.

Now in stark contrast to the anthem protests that have NFL ticket prices in freefall, one guy is prepared to STAND… and to do so when nobody else will.

When the anthem played for the Steeler game, most of the team stayed out of sight.

But Left tackle Alejandro Villanueva is not like ‘most people’.

So however ‘safe’ his team may have been trying to play it, Villaneuva stepped up, and was present for the anthem. And people noticed.

“We’re not going to let divisive times or divisive individuals affect our agenda. This collection of men, we’re chasing something here in 2017 and we’re not going to play politics. we’re football players, we’re football coaches. We’re not participating in the anthem today, not to be disrespectful for the anthem, to remove ourselves from the circumstance. people shouldn’t have to choose. If a guy wants to go about his normal business and participate in the anthem he shouldn’t be forced to choose sides. If a guy feels a need to do something he shouldn’t be separated from his teammate who chooses not to. So we’re not participating today. That’s our decision. we’re going to be 100 percent. We came here to play a football game. That’s our intentions. And we’re going to play and play to win.”–Pennlive

Good on him for stepping up.

As for the politicization of sports — whether Football or NBA?

This firey video clip is lighting up the internet right now, and saying what a lot of us already feel. Check it out!

And here is the mssg mentioned in the update, one that should make everyone who takes the knee blush for shame.

“A Gold Star Mother’s Message to ALL Football Players and Coaches!!

As a Gold Star Mother addressing the Non Professional actions of Professional Football Players in the United States of America.

My Marine Son gave his life during an ambush in Afghanistan so that ALL Americans could have a bigger voice than he had on the battlefield that fateful day of September 8, 2009.

My message to ALL Professional Athletes who are privileged to live and play in America while making millions of dollars:

As a Gold Star Mother…it pains me to see those protesting Americas image, Respect the Country that provides such a wonderful life, respect our Warriors who gave their lives (my son included).

Don’t dance on the graves of our fallen, as our Flag drapes the coffins of Americas men and women of Valor!! They are the reason you are allowed to be overpaid in your profession.

The only knees that should be bending on Football Sundays should be that of proud Americans in church….Don’t use National Television and Media to display your personal opinions, Americans are tuning off to you whether you want to believe it or not, numbers don’t lie.

Use your platforms to Rise up and mentor the minds of young men and women who desperately need direction!

Let me remind you how BLESSED you are to be living in the U.S.A.

God Bless America, the land of the free, because of the brave. 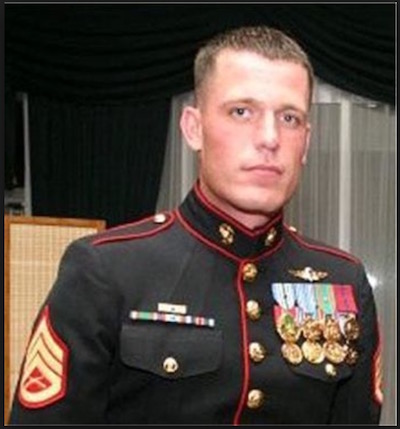 And as for the rest of the NFL — start passing this book around… STAT. Becuase your ticket sales and ratings are in free-fall.