The King of Pop isn’t JUST remembered for his music…

He was an eccentric guy.

From his affinity for plastic surgery to his strange relationships with women, and of course, the allegations of sexual abuse.

There are still ongoing lawsuits against Michael Jackson’s estate claiming sexual abuse by the pop star.

Michael Jackson still lives in Las Vegas, sort of. The 10-foot statue the King of Pop created for his 1995 “HIStory” album cover was recently installed in the lobby of the Mandalay Bay Resort & Casino.

Dancers from “Michael Jackson ONE,” the Cirque du Soleil production staged at the resort, performed at the unveiling on July 28.

Fans will recognize the statue made by Diana Walczak. It depicts Jackson as a monumental warrior-like figure.
Source: LA Times

But, hey, MJ was a controversial figure, to say the least.

In 1993 he was accused of molesting 13-year old Jordan Chandler. Jackson settled the case for $20 Million. Since then Chandler has been very low profile because his lawsuit had angered Jackson fans. The 37-year old has left the U.S. and his family was subjected to death threats and harassment.

There are two other accusers that filed lawsuits against the estate alleging years of sexual abuse.

As late as July of this year, the two alleged victims, Wade Robson and Jimmy Safechuck are looking for Chandler to tell his story.

Chandler has kept a very low profile in recent years but fellow alleged molestation victim, celebrity choreographer Wade Robson, is now searching for him in the hopes he can testify in his ongoing lawsuit in 2013 claiming he suffered years of sexual abuse after he was groomed by two of Jackson’s companies.

Lawyers for Robson, 34, and Jimmy Safechuck, another companion of Jackson who says he was abused by the star as a child, are searching the U.K. and other European countries trying to find Chandler.

‘Wade and Jimmy want to look Jordie in the eye and talk to him about what they suffered,’ a source told the New York Daily News. ‘They feel that they may appeal to him to finally tell his story.’

Some details of the abuse were released in the aftermath of the lawsuit.

Both Jordan’s biological parents said they caught Jackson snuggled in bed with their son on separate occasions. Evan claimed he went into his son’s bedroom one night to find Jordan being cradled from behind by Jackson, whose hand was cupping his groin.

Jordan’s harrowing police statement later described in detail how Jackson seduced him on a jaunt to Monaco, after handing the boy’s mother June a wad of cash to go on a shopping spree.

Jackson maintained his innocence but settled the civil lawsuit by paying Jordan $20million.

Robson says that he first met Jackson when he was five years old and claims that the abuse went on for seven years.

He claims that Neverland Ranch was a ‘well-orchestrated trap’ for Jackson to find and groom children for abuse. He says that the whole family was included in the trips to the Ranch — plane tickets are paid for, as are meals, the family was given gifts upon arrival, and the theme-park nature of Neverland was enjoyed.

Jackson would then take children to sleep with him in his bed while the rest of the family was housed elsewhere.

Robson, who has since worked with Britney Spears and appeared as a judge on So You Think You Can Dance, claims the abuse went on for the next seven years.

The abuse ranged from French kissing to penetrative sex and only stopped when Robson began ‘showing signs of puberty’, the complaint claims.

That’s when Jackson became ‘no longer as interested in him sexually’.

Some are dismissing the claims because Jackson is no longer alive to defend himself, and this is all about ‘money’.

Jackson’s estate called Robson’s allegations ‘less than credible’, but the choreographer said he would never make such public claims for money.

‘The idea that I would make all of this up and put myself, my wife, my son, my entire family through this extremely stressful and painful experience all for money is incomprehensible,’ he said.

‘I’ve lived in silence and denial for 22 years and I can’t spend another moment in that.’
Source: Daily Mail

In that light, because the Leftists want to make sure that everyone that gets a statue erected is a paragon of virtue, should the massive Michael Jackson statue be removed? 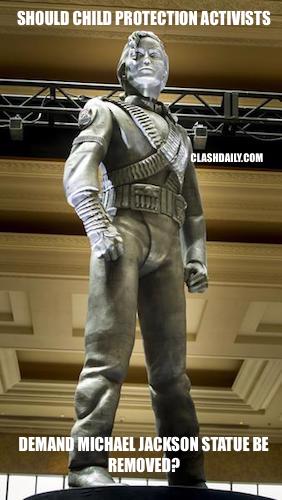 These are the people that want to remove the names of George Washington and Thomas Jefferson from parks and schools because they were slaveholders.

The monuments aren’t there for them being slaveholders, though.

The monuments and honors are there because they built this country.

If we start demanding that everyone be perfect before we give them a statue, then we wouldn’t honor anyone.

Because we’re all human.