Massive manhunt as Londoners experienced yet another bloody attack. (Amid fears of other attacks.) The kind that London’s Muslim mayor calls ‘part and parcel’ of living in a big city.

An Improvised Explosive Device in a bag on a subway detonated during rush hour.  It caused chaos as twenty-two people suffered ‘flash’ burns. Fortunately, nobody was killed.

Discrepancies in casualty totals are fairly common early on. The numbers we’ve been hearing so far are 22. This could change, either up or down.

Here is an official statement: 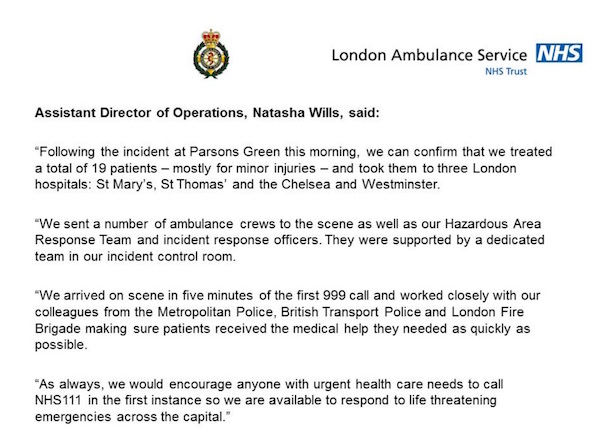 It was described as an ‘incomplete detonation’.

The gutless British Press is describing it as ‘an incident’.

…like a bar-room brawl breaking out between fans of Manchester U and Chelsea.

…Or someone towing a car that has diplomatic plates.

… or A ‘Bucket Bomb’ on a crowded subway.

Meanwhile, President Trump tweeted in response to the event:

Another attack in London by a loser terrorist.These are sick and demented people who were in the sights of Scotland Yard. Must be proactive!

Those in America who are tired of reacting to events AFTER the fact and agree that we have been lax in tending to our own security will probably like his tweet.

Especially those of us who think the wall needed for reasons other than just illegal immigration from nations to our South… but also for international terrorists who would gladly exploit that gap in our defenses.

Scotland Yard and 10 Downing Street in the UK, didn’t like it quite as much.

Labour MP Stephen Doughty, a member of the Home Affairs Select Committee, told the MailOnline: ‘Comments like this from President Trump, or anyone else, are extremely unhelpful.
‘The full focus must be on allowing the police and security services to do their job, and those responding at the scene to the emergency and tending to those injured.
‘Continual speculation and breaching of intelligence and security sharing by the US President has the potential to not only undermine a vital relationship, but also to prejudice investigations into this and other incidents.’ — DailyMail

Strange that it might ‘prejudice the case’. They had no trouble blaming explosions on the IRA when they were the ongoing threat. Out of the numerous attacks so far this year… have any of these attacks NOT been related to Islamic terror?

And how many times have we found out after the fact that attackers were already ‘known’ to police, and ‘known’ to have Jihadi tendancies?

They have identified a suspect, and there is a massive manhunt in search of him