Is this guy’s mind any stronger than his threats? How did THIS guy wind up teaching people preparing for a career in…

The guy who laughed at dead cops is teaching Criminal Justice??

Does that seem ‘off’ to you?

Let’s get this straight…

Dartmouth professor Mark Bray, who has written extensively about Antifa — and defends their tactics — recently told The Washington Post, “[Antifa’s] adherents are predominantly communists, socialists and anarchists who believe that physical violence is both ethically justifiable and strategically effective.”
…There is little question that things will get worse. The Department of Homeland Security (DHS) recently classified Antifa’s activities as “domestic terrorist violence,” and for several months DHS and the FBI have been warning local officials that the likelihood of violence between white supremacists and left-wing radicals is considerable, and advised local authorities to take appropriate action to control it. As radical groups perceive that they are succeeding in spreading violence and mayhem, it is likely that their attacks will become more frequent and more intense. — WashingtonTimes

So… what does the professor have to say about his little movement?

Mike Isaacson, a professor at the John Jay College of Criminal Justice and a co-founder of the Antifa organization Smash Racism D.C., promotes political violence. In a series of tweets, he also laughed at dead police officers. —DailyCaller

“There is the question of whether these people should feel safe organizing as Nazis in public, and I don’t think they should,” he continued. “I don’t think anyone should think that someone who is intent on politically organizing for the sake of creating a state-sponsored genocide — I don’t think is something that we should protect.”

Antifa supporters like Isaacson share the belief that Donald Trump is a white supremacist whose actions will move the United States towards fascism. Violent actions against the police and domestic terrorism are therefore justifiable as acts of political resistance. It is important to note Isaacson’s definition of “fascism,” however. —DailyCaller

If he’s such a tough guy, why doesn’t he leave his mask at home, and challenge some alleged Nazi to a Charity Boxing match?

Say, one that benefits a library program for inner-city kids, or something like that?

Let’s see if the guy who supports crowds of people curb-stomping strangers in the street is quite so bold in his defense of violence if it’s He’s not standing behind a crowd of anonymous thugs throwing urine bombs and spraying mace in women’s eyes.

And why is someone who does not even believe in the rule of law even TEACHING a justice program, anyway? 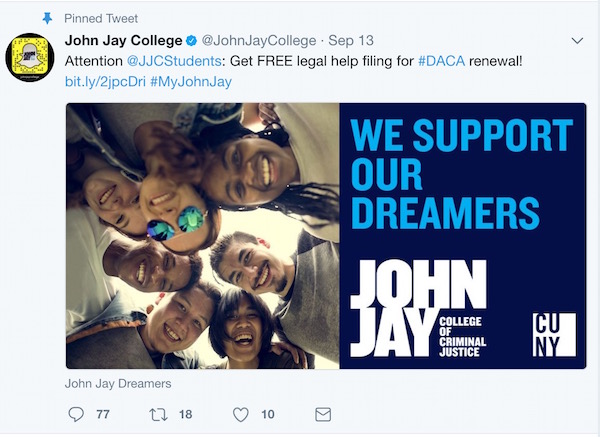 They may want to think about renaming their college…

John Jay was not opposed to the rule of law. He was the FIRST Chief Justice of the US.

Not really the kind of guy who would endorse the hiring of someone who launched domestic terror movement against American citizens.

If he launched a group affiliated with what Homeland has called ‘domestic terrorism’… will they be paying him a visit?