In the face of an imminent natural disaster, some people prepare to keep their loved ones and their property safe, but others see it as an opportunity to take someone else’s stuff.

ClashDaily has shown you the difference between the Heroes and the Zeroes after Hurricane Harvey.

Looting during a crisis is vile.

In the midst of Hurricane Irma battering Florida, some folks decided to help themselves to other people’s stuff.

And many have been caught.

They had been warned ahead of time but didn’t listen.

ATTENTION LOOTERS; Every incident will be investigated. Evidence collected will be used to pursue charges after the fact. #HurrcaneIrma

#FLPD WARNING from Chief: "anyone who intends to victimize our neighbors during this difficult time…will be captured and arrested."

At least 32 people have been arrested across Florida for trying to loot empty businesses and homes that have been evacuated in preparation for Hurricane Irma – 28 alone in Miami, according to local authorities.

Two people burst into an Orlando sporting store and allegedly stole guns, before facing off with SWAT in a standoff.

Top of the line shoes seem to be in high demand when preparing for a hurricane:

In the Orlando area, a sporting goods store was the target.  A SWAT team was deployed when it was determined that some looters were attempting to steal guns and ammunition.

Police were called to the scene after witnesses reported a burglary at Academy Sports near the Mall at Millenia in Orlando, WESH reported.

At least one person surrendered while another barricaded himself in the store and refused, according to WFTV.

Soon afterward, Orlando Police released a statement announcing that officers took two suspects into custody and that the event was ‘peacefully resolved’.

Thinking about looting? Ask these guys how that turned out. #stayindoors pic.twitter.com/7m42B0KFr4 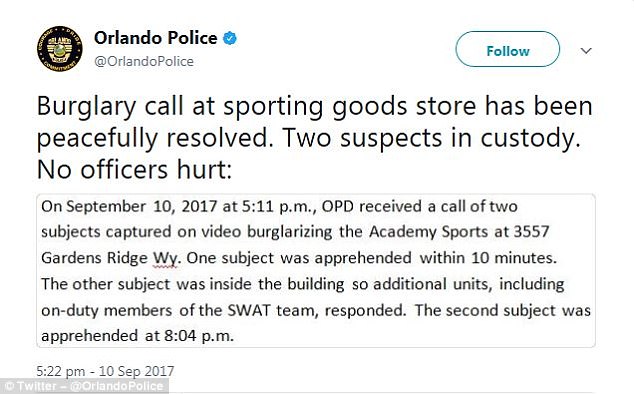 Authorities identified the suspects as Ryan Cook and Max Saintvil, both 28 years of age.

There were more reports of men dressed as utility workers and robbing homeowners.  In Fort Lauderdale, one 17-year old suspect was shot by police as he was attempting to break into a home.  He was rushed to the hospital and is being treated for non-life threatening injuries.

So, which party do you think these dirtbags voted for?

Is it the party that promotes personal responsibility, independence, and limited reliance on government?

Or the party of blame-shifting, victimhood, and the redistribution of wealth, whose candidate still wonders ‘What Happened’?