The Media (D) would never mention it even though she’s absolutely right.

Have you noticed something about these shoe store looters?

They seem to go for the high-end athletic brands.

It’s not like they’re grabbing rain boots out there — something you’d think they’d need after tidal surges and flooding.

Nor are they grabbing work boots which would also be incredibly useful post-hurricane. 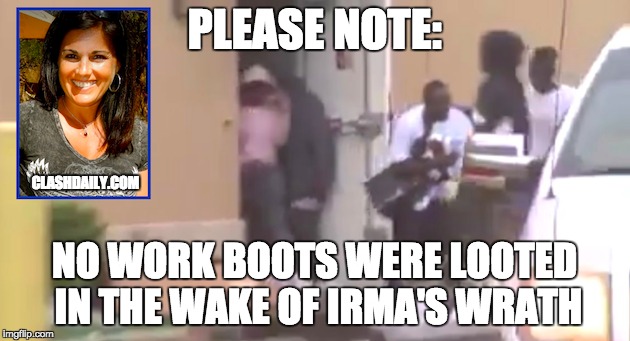 ClashDaily showed you videos of these criminals grabbing shoes from a couple of sporting goods stores and the fate of many of them.

Maybe they’re just opportunists using the natural disaster to take things that don’t belong to them.

But if you say that, then you’re a bigot or something.

Needless to say, that anyone that loots during a natural disaster is stealing — whatever the color of their skin, or their heritage.

But that’s not the way it’s portrayed in the Media (D).

Watch this satirical look at looting from ‘It’s Always Sunny In Philadelphia’:

When the power is out and your house is demolished, how exactly are those 6 pairs of Yeezys going to help you survive?

Unless… Nah, they wouldn’t be reselling them, would they?

Who would do such a thing?