Want to send the NFL a message? Wear THIS shirt loud and proud!

Because they keep ‘explaining away’ their cratering ratings.

They are changing their approach to commercials, in case THAT was ‘the problem’.

(News flash: that’s not the problem.)

They have had to ‘adjust’ ticket prices because they can’t fill the seats in their stadiums.

Veterans have written open letters about the protests.

…until he apologized for standing for the anthem, and ‘making his team look bad’.
Steelers Coach Rebukes Player For STANDING For Anthem – This Is Total BS

We ‘get’ that you’re a team player, and trying to take the high road, but the way WE see it is that THEY let YOU down, NOT the other way around.

We’ve got all these clues…

And they STILL can’t seem to connect the dots between the anthem protests and declining viewership.

YO, LIBS: Record Number of NFL Players Kneel – Here’s The TV Ratings After That Hissy Fit

Just like the ‘news’ can’t figure out why Trump’s popularity just surged.

CLASH POLL: Do YOU Agree With Trump’s Stance On The NFL & Our Anthem?

Obviously, the guys making decisions over there are not very bright. Maybe one too many knocks to the head. Maybe someone chlorinated the gene pool. The reason doesn’t really matter.

We’re dealing with dopes, and we’ll need to use very small words they can understand.

Let’s spell it out for them. Ratings are DOWN because, after all your stupidity, you have: 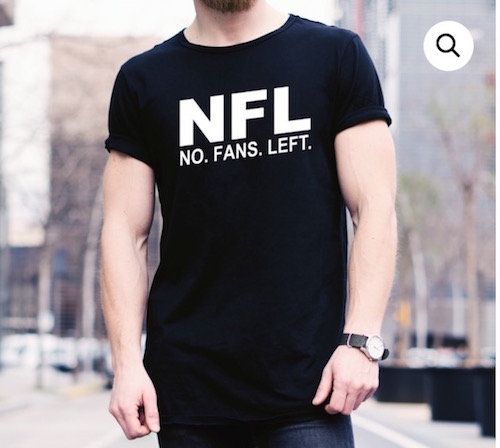 What makes this even BETTER?

These shirts are made in the USA.

Veterans — you know — the people the NFL doesn’t mind throwing under the bus to keep their players’ union happy.

From the description on the site over at “Keep And Bear”

If you want to punt the NFL in the crotch, what better way than this?

Even better, take a photo of yourself wearing it, and hashtag it #NFL. That might get their attention. They LOVE PROTESTS, don’t they? And things that go viral, and social media campaigns.

So why not wear a fine American-made shirt while you sing our anthem at a College Football game.

Or an NHL game.

Or — wouldn’t you know — the old ‘Lingerie Football League‘ is all grown up (rebranded Legends Football League) and playing real football now… just prettier. You could wear it there!

And THEY have taken the strong stand on our flag that the ‘real’ football league should have.

After all, you’ll need SOMETHING to wear, now that you won’t be seen in public wearing NFL merch.