Get your tin foil hat ready. We’re going to Crazytown for this one!

There’s a new conspiracy theory out there. Melania has a body double.

(But pay no attention to the fact that Trump can’t even order a second scoop of ice cream for dessert without the leak becoming a ‘CNN Special’.)

It all started at a press conference, where Trump awkwardly made mention of Melania standing beside him.

‘My wife, Melania, who happens to be right here,’ he said.
Conspirators have based their theory of a Melania body double on the fact that Trump pointed out the First Lady was there to cover for the fact she was actually somewhere else.
They also claim that the Melania doesn’t appear to look like herself in the footage, specifically questioning the shape of her nose. —DailyMail

Here is the photo he claims ‘proves’ his theory. 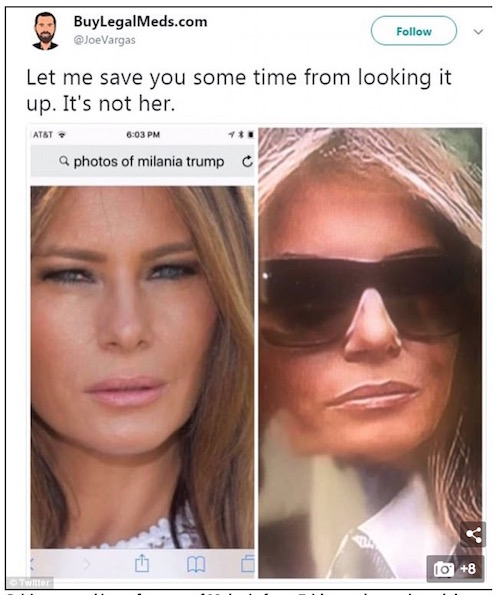 Two very different photos, with vastly different lighting, plus any filters that may have been in use when they took the image on the left.

Do you really think they could keep this a secret?

What’s his real motive for posting this?

He’s trying to hawk his products?

Do you think he actually believes this drek?