Forward this to Frederica Wilson, the Democrat who’s trying to whip up outrage over how Trump has spoken to Gold Star families.

It should be pretty obvious where Trump’s loyalties lie.

In a clean break from the last administration’s priorities — like the standing invitation BLM apparently had to Obama’s White House — Trump has shown a great respect for those men and women in uniform. This extends both to First Responders, and our military.

In response to the recent firestorm of controversy about Trump calling Gold Star families, and how well he did or did not handle those phone calls, one Gold Star mother has spoken up in his defense.

Obama fans will not like what she has to say.

In 2009, Jill Stephenson got word that her son, Army Ranger Benjamin Kopp had succumbed to complications from his injuries.

As some of the media keeps bashing President Donald Trump for his comments about Barack Obama not calling families of the fallen, Stephenson shared her experience with Independent Journal Review.

“I never got a call,” Stephenson said, “The Obamas never sent these, either.”

Then she shared a powerful and heartfelt letter she received from First Lady Melania Trump just after Memorial Day: —IJR 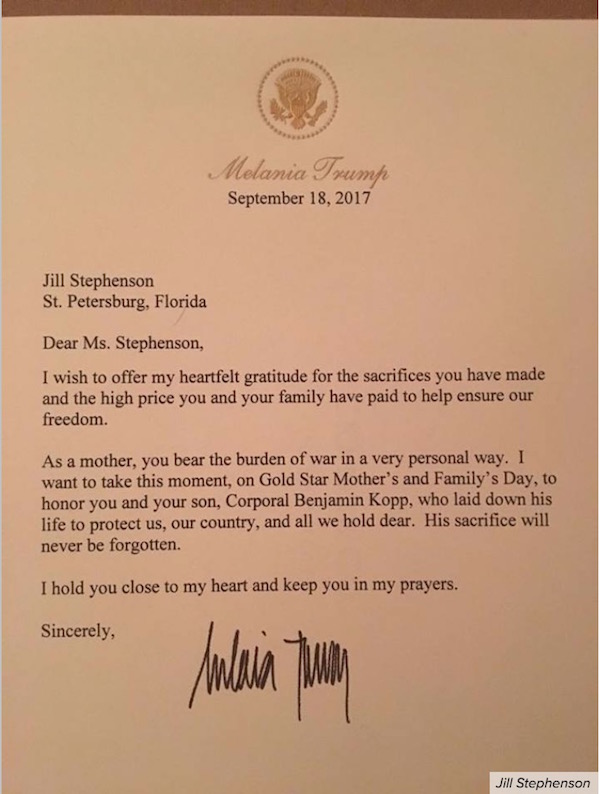 The letter reads as follows:

I wish to offer my heartfelt gratitude for the sacrifices you have made and the high price you and your family have paid to help ensure our freedom.

As a mother, you bear the burden of war in a very personal way. I want to take a moment, on Gold Star Mother’s and Family’s Day, to honor you and your son, Corporal Benjamin Kopp, who laid down his life to protect us, our country, and all we hold dear. His sacrifice will never be forgotten.

I hold you close to my heart and keep you in my prayers.

They have special dinners for the Gold Star families. They vigorously defend our honorable traditions, like the flag and the anthem.

Trump is returning the Presidency to the limits expressed in the Constitution.

So do any of us REALLY believe that Trump would be deliberately malicious to a Gold Star parent?