Could it be that our public schools have failed us THIS badly?

Well, judging by other posts in that feed… our public schools really HAVE failed us this badly… and worse. 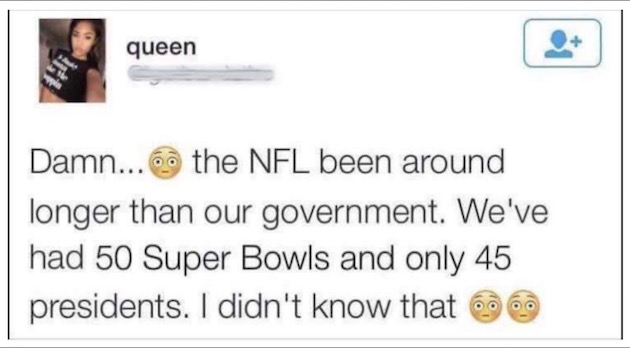 Yes! And look up the footage of Paul Revere in that half-time show! It’s awesome!

NFL’s first Superbowl — not first game — was 1967. That was under president LBJ.
LBJ is the 36th President.

This would probably leave our poor basket-case scratching her head.

There is one Superbowl every year. (Whether anyone will still be watching it this year, is another question…)

There is one President elected every 4th year. But some Presidents — like Obama, Dubya, Clinton, Reagan, have been in office for 8 years.

Others have had their presidency cut short due to death through illness or assassination.

My nine-year-old saw this

Maybe you should put down your phone and read a book.

How about this one: