Is EVERYTHING ‘offensive’ these days? Apparently, yes, everything IS offensive these days.

As summer gives way to autumn, and the first bites of winter fill the air, it’s time for the colleges to send out handbooks and tell students which Halloween costumes are and are not ‘appropriate’.

The ‘Our Culture Is Not A Costume’ campaign was popularized by Ohio University students back in 2011 and has only gained momentum.

The campaign has photos of minority students with a stereotype costume depicting interpretations of their ethnicities. The posters include the words, ‘We’re a culture not a costume. This is not who I am, and this is not okay.‘

This year, Towson University announced that is has joined “Ohio University and universities across the country in reminding our community this Halloween that ‘we’re a culture, not a costume.’”

“Halloween costumes that are based on ethnic, racial, religious, gender, ability, and other cultural stereotypes are hurtful and reduce people’s identities into caricatures,” the university elaborates, noting that “intent may be far different than the impact,” and that “one night of fun” can turn into a “stigma that others wear for life.”
Source: Campus Reform

At this rate, even jeans and a t-shirt will be deemed offensive.

This Halloween t-shirt is REALLY ticking off the leftists.

Can’t imagine why that would be… 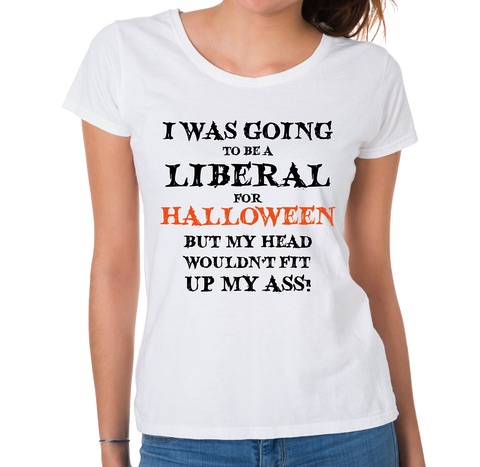 Don’t you NEED one?

Don’t worry, they’re not just for the ladies.

Perhaps some Liberals have a “big heart.” But in reality, they are only being generous with other people’s money. Other liberals are just full of hate for everything and anything that has made America great. They hate guns, beautiful women, and fast gas-guzzling cars. But all liberals are have one thing in common… they all have their heads up their asses.

I was going to be a Liberal for Halloween, but my head wouldn’t fit up my ass!

Liberal for Halloween T-Shirt (MADE IN THE USA)

Liberal for Halloween Women’s T-Shirt (MADE IN THE USA)

Back in Grandpa’s day, it was ok to play ‘Cowboys and Indians’. Now, not so much.

But we’ve got 673 genders, anxiety and depression on the rise, and leftists celebrate the life of ‘cultural icon’ Hugh Hefner while they denounce the same side of that coin, Harvey Weinstein.

And where is our focus? Appropriate Halloween costumes.

We’ve got some things really messed up.

We could all use some of Grandpa’s wisdom: