Just when you thought the NFL ‘Take A Knee’ clowns had reached Peak Stupid, here they go surprising you by sinking to new depths of idiocy.

Donte Stallworth, former NFL wide receiver, had stated on CNN on Saturday that we’ve got this whole ‘Take A Knee’ thing wrong. 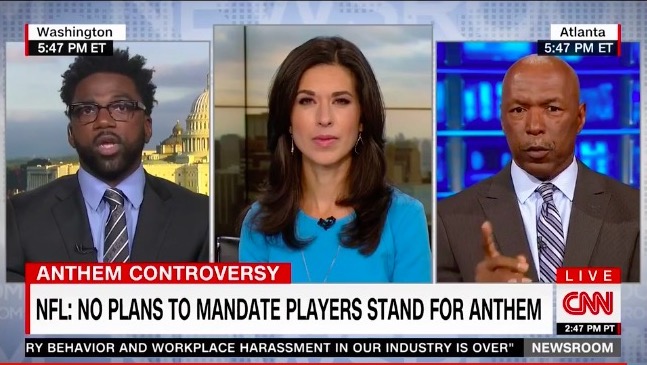 Doug Giles, of course has some things to day about Stallworth:

Looks like Doug was right about the players not backing down.

Stallworth says that this ‘Take A Knee’ protest is covering way more than just ‘systemic racism’ in police departments.

This protest isn’t just about police brutality — it’s about a whole host of progressive issues, including the ‘gender pay gap’ and ‘housing discrimination’.

Is this bro serious?

He retweeted this video of Eric Reid on Twitter to prove his point:

. @E_Reid35 "hopes the NFL is progressive and uses their platform to bring awareness to these issues so we don't have to protest anymore" pic.twitter.com/j0nvZ1MRF5

Stallworth appeared on CNN on Saturday and said this:

The number one stated goal was to bring awareness to a lot of these issues and again, its a broad spectrum of issues. Again, it’s not just police brutality and community policing.

It’s also, again from what I’m hearing from players directly involved in these talks–they’re telling me it’s also about the gender pay gap, it’s also about housing discrimination, they have so many things that they are interested in and advocating for and they want the NFL to take ownership in and help be able to use the NFL’s platform.

Not just the players platform but the NFL’s platform and that from what I am hearing is a big conversation.

These players are taking a stand — or should it be ‘taking a knee’ — for women’s issues.

Will these Progressive Moralists also be ‘taking a knee’ for these issues:

Or, you could just go to NFLarrest.com and see what the ‘issues’ they’re protesting are.

These bros are arrested on average every 7 days. There are 1,700 players, and they still can’t go more than a week on average without arrests. Disgusting.

It’s nice to see them weigh in on ‘women’s issues’ like the alleged ‘gender pay gap’ that doesn’t even affect their business.

Or is it the plan to bring women into the NFL?

That doesn’t seem like a good idea to me.

Having these guys weigh in on women’s issues is like having Michael Vick promoting the Humane Society.

If Twitter is any indicator, Donte certainly started a ‘conversation’:

How does #CNN use #DonteStallworth to talk about these issues; cmon he killed a dude and got a slap in the wrist sentence.

#DonteStallworth Guilty of DUI manslaughter, still played in the #nfl, and was signed by the @Ravens. #KapDidntDoThat

Don't worry #DonteStallworth. #NFL & players r both headed to big cuts. So they will be making same equal pay as Lingerie Football League.

The claim is that the players are protesting all sorts of issues that they believe in now so that they won’t have to protest anymore.

Um… if this protest has morphed from what it was into a myriad of issues, how will we know when the goals have been accomplished?

Will this just carry on throughout the entire Trump Administration?

Or will it end when they really do have No Fans Left?

Vernon Jones Explains Why He Switched to the Republican Party – Proud to Be In Party of Lincoln, Trump
January 19th, 2021 The Mental Recession