This woman is probably looking forward to having the month of October behind her.

Michella Flores, a 51-year old flight attendant from California was caught in two massive tragedies in as many weeks.

This lady is a survivor of the Las Vegas massacre on October 1 and was fighting back the wildfire approaching her parents’ Santa Rosa home on October 7. 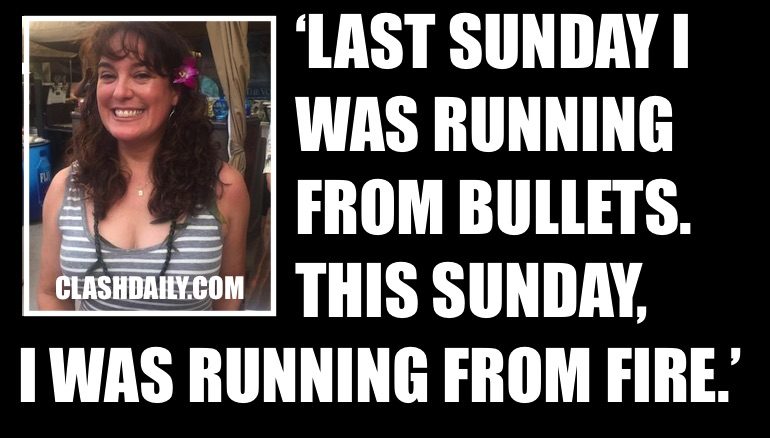 Flores, who is a former firefighter and former paramedic, is holding up well under the stress.

And even after the shooting has continued to work her multiple jobs without taking a day off.

Flores, a longtime country music fan, had flown to Las Vegas on the morning of October 1 and was staying at a hotel across the street from the Route 91 Harvest Music festival. She had nothing better to do, so she walked over and watched the show from the sidewalk as she was waiting for her next job on a flight on Monday. She was watching Jason Aldean perform when the bullets started flying. She took cover with many concert-goers in a conference room at a nearby casino.

They were barricaded in, and Flores was frustrated. She said, ‘You’re sitting there waiting for someone to open the door and be shot. It drove me nuts.‘

The next day, Flores did her job, despite not sleeping at all — the bodies were visible from her hotel room window.

She returned to Santa Rosa and worked her second job as a ground support technician for non-commercial flights. This job gave her insight into the approaching wildfire because the California Department of Forestry and Fire Protection uses their services.

She arrived home on October 7 and could see the glow of the flames approaching her parents’ home where she is living temporarily while in the process of moving.

When she learned that the fire was approaching, she called her parents to pack and rushed home. She took a garden hose and battled the flames alongside firefighters. Things seemed under control as she left for her job at the Oakland airport.

By the time her shift was over, the house had been destroyed.

Although most of her possessions are gone, and Flores has lost everything, she’s still grateful that her parents and her dog are fine.

She says it will hit her hard later, but she doesn’t have time for that right now.

‘Right now, I’m in this space where things need to get done. And I’ll deal with the rest later on.‘

We wish you all the best, Michella.

You’re a survivor and an inspiration.

Raise your girls to handle life’s tragedies like Michella does: