If you feel so strongly about it — knock yourself out.

Did you think the NFL memo on standing would spell the end of the issue?

It didn’t. Some players have decided that a platform they don’t own, in a game they didn’t schedule, in a stadium they didn’t build, while wearing their work clothes is the precise time that they need to express a private opinion. … consequences to their employer be damned.

They think they can pop off like Eminem did, and still show up on game day like nothing ever happened.

Where — in real life — do you ever see that happening? Would a traffic cop be ok to hold traffic in both directions to give a PSA on distracted driving? What about someone working a drive-through window holding up a customer to tell them about the joys of CrossFit?

Where was the outrage about private expression when the player was fined for jumping into the Salvation Army Kettle? No. It’s not a ‘right’ to do your own thing on company time, at the company’s expense.

And if he can’t continue his protest, one guy will quit football. 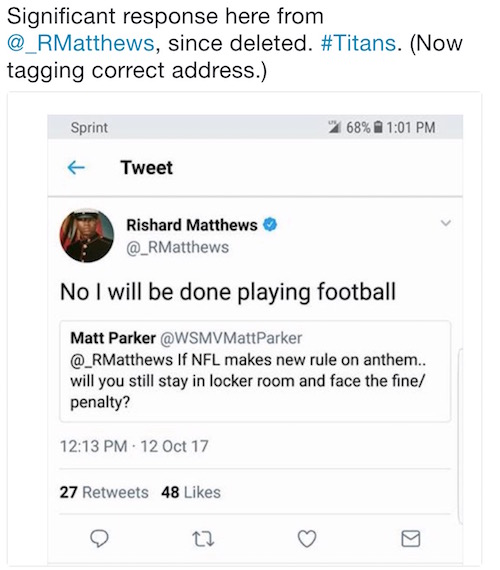 Maybe he doesn’t quite understand a couple of really key ideas.

One — threats require meaningful leverage and a plan for follow-through.

Two — the law of supply and demand is NOT working in his favor.

Three — he has already lost in the court of public opinion.

If he quits, does he really think there is a shortage of other players skilled, eager, and hungry to fill his shoes?

Maybe while he’s thinking about how to fill all that free time he’ll have, he can give this book a read. It might put his self-centered attitude in a new light.