One guy with a grudge is a different problem than a guy who threw in with a virulent ideology. Our quest for solutions will be more effective if we can determine a motive.

And like it or not, we keep hearing the name ISIS.

A former Trump Campaign Official — James Brower — published a series of tweets that brought this back into the conversation.

As we have reported since day one, ISIS has tried to claim responsibility.  We have been careful to be skeptical about such claims… it could be just a PR play.

But increasingly, there are clues that the facts on hand do not paint an adequate picture.

Like why was there a second guest on the room service receipt?

Who was the woman that told the front row ‘you’re all going to die tonight’ 45 minutes before the shooting started?

If even law enforcement experts are now saying it would be almost superhuman for him to pull this off on his own… who helped him — and WHY?

These tweets are bringing the ISIS angle back into the conversation:

IS Features Infographic on Las Vegas Attack in Naba 100 https://t.co/WHaCgoi5DD 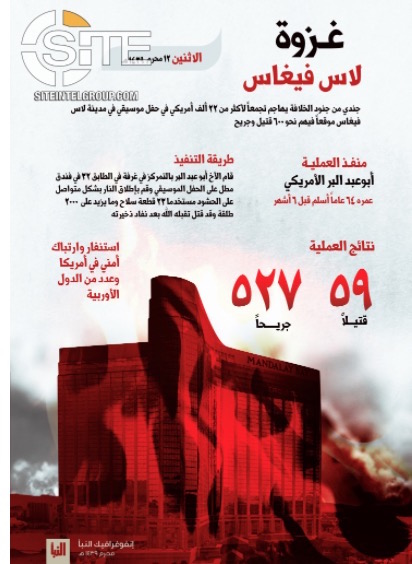 The was-he / wasn’t-he question could be put to rest one way or the other.

There’s a claim that we have an answer in his own words.

If that claim proves accurate, we’re not dealing with some guy with a grudge, but a jihadi-sympathizer.

Why does this matter?

Well, ISIS just lost their last territory in Iraq — Hawija. And we are the reason they are losing their position there. They will be adapting their approach.

They are running out of options, besides taking the fight to us, in our own backyard. If it turns out that we are fighting ISIS… Jimmy Kimmel browbeating us into a national conversation on GUN control will not just be dumb… but dangerous.

Because it will leave us wide open to a REAL threat.