OUCH!It must be REALLY embarrassing to have your anti-2A narrative blown to bits by a guy too young to buy himself a beer.

Some internet hotshot figured he would be awesome if he slammed the Second Amendment as antiquated.

He thought he had won the argument with a smug little meme.

That celebration was cut just as short as a Clinton Victory party.

Here was the set-up:

Notice it was by ‘US Democratic Socialists’.

Of course it was.

Why WOULDN’T it be? 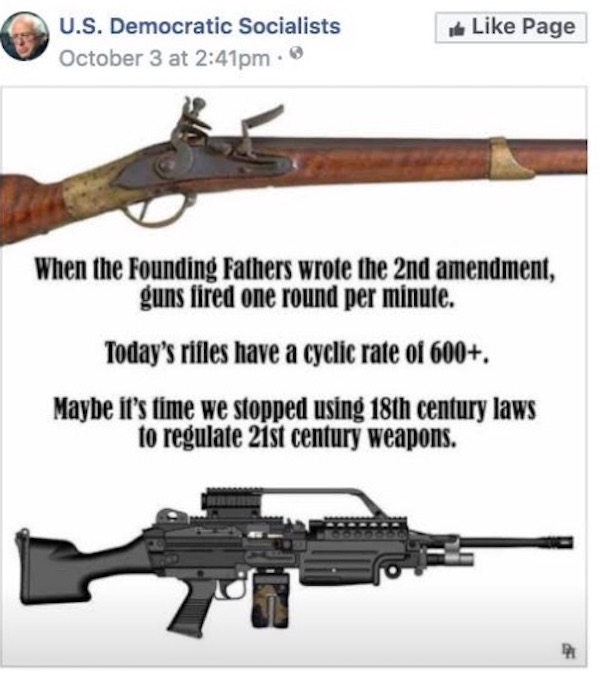 When the Founding Fathers wrote the 2nd Amendment, guns fired one round per minute. Today’s rifles have a cyclic rate of 600+. Maybe it’s time we stopped using 18th Century laws to regulate 21st Century weapons.

It looks like he actually understands what the purpose of the 2nd Amendment was. And as great as eating venison can be, they didn’t have hunting in mind.

Here was his reply: 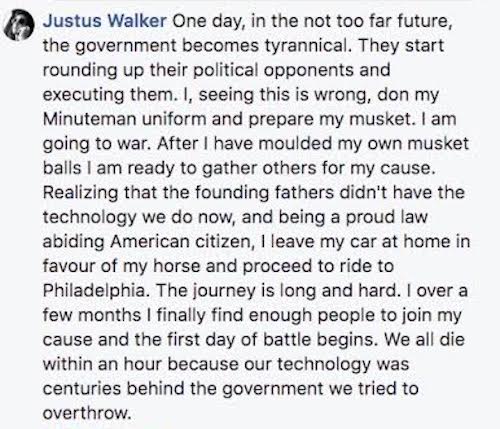 Here is the text written out for ease of reading… exactly as he wrote it.

One day, in the not too far future, the government becomes tyrannical. They start rounding up their political opponents and executing them. I, seeing this is wrong, don my Minuteman uniform, and prepare my musket. I am going to war. After I have moulded my own musket balls, I am ready to gather others for my cause. Realizing that the founding fathers didn’t have the technology we do now, and being a proud law abiding American citizen, I leave my car at home in favour of my horse and proceed to ride to Philadelphia. The journey is long and hard. i over a few months I finally find enough people to join my cause and the first day of battle begins. We all die within an hour because our technology was centuries behind the government we tried to overthrow.

That kid’s already dangerous to leftist ideas. Imagine what he’ll be like when he hits full stride?

We need more feisty people like him. And this guy: