Being eternally outraged must be exhausting. How DO the leftists keep it up?

Just how far are they going to press this line of thinking? Will this trigger the mandated elimination of urinals from public washrooms in schools and universities?

Will they insist dudes sit to urinate? It’s not quite the ‘stretch’ you might think. In Germany they already have signs like this: 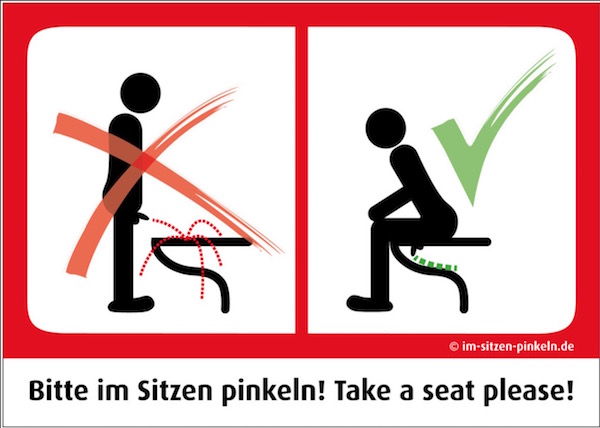 And a German man just won a court case — I kid you not — where it was ruled that he has the right to stand and urinate.

There is open war on all things masculine. And now ‘intellectuals’ have weighed in on how standing to pee gives men an unfair advantage in physics.

Let’s see how well you can follow ‘patriarchy logic’. Have you guessed WHY yet?

It has to do with the arc.

What follows was actually published in a ‘scholarly’ journal.

After noting that girls lag in areas of physics that deal with projectile motion, the article reveals: “Like many parents of small (and not-so-small) boys, two of us (KW and DL) have observed the great delight young males take in urination, a process by which they produce and direct a visible projectile arc.” — PJMedia

He goes into a list of ‘cultural practices’ that involve guys having fun with directing the arc of their pee. This includes peeing contests. Something called ‘peeball’. Writing you name in the snow, and the like.

All this is experienced up to five times a day, so by 14, boys have had the opportunity to play with projectile motion around 10,000 times. And 14 is when many children meet formalised physics in the form of projectile motion and Newton’s equations of motion for the first time.

Which 'solution' is most likely to be proposed by the Left?