When he was planning his crime, he didn’t expect THAT to happen.

It didn’t work out well for him.

Young was threatening the cashier with a boxcutter, but that bro wasn’t having it.

Andre Young, 52, attempted to rob a Speedway off Northland Boulevard in Forest Park on Monday night, but was stopped by a single powerful punch to the face in a moment captured by security cameras.

Armed with a box-cutter, Young allegedly told the cashier ‘we can do this the easy way, or the hard way’ before trying to jump over the counter.

Bro punched him in the eye!

Watch the ABC 9 report with the video of the incident.

That is one helluva shiner. 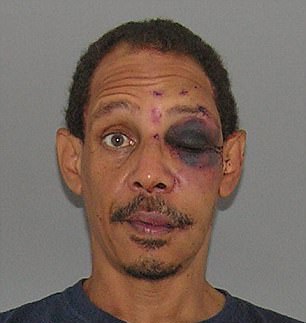 Don’t you love that the bro behind the counter said that Young was ‘leaking’?

Young is now facing charges of aggravated robbery and assault.

He was given a $175,000 bond and was charged with aggravated robbery and assault.

And this isn’t the first time Young has tried and failed to rob the gas station – in 2005 he was convicted of using a bat to rob the same Speedway in 2005.

He also has five prior felony convictions, according to Dave Wood from the Hamilton County prosecutor’s office.

The identity of the cashier remains unknown.

To that unidentified cashier, we’d like to say something…

That was awesome, bro!  Way to go!

Keep up the badassery against the bad guys.