The Duck Commander is back and so are the critics.  Check out the latest B.S. tossed his way.

Phil Robertson is no meek and mild Christian.

Here at ClashDaily, that’s right up our alley.

Duck Dynasty isn’t on the air anymore, but Phil Robertson is doing a new online show on Conservative Review called  ‘In the Woods with Phil‘.  Despite its release just a few days ago, the CRTV show is already being ‘censored’ by Facebook.

Recently, Facebook labeled a video staring “Duck Dynasty” star and future star of Conservative Review‘s “In the Woods with Phil,” Phil Robertson as “graphic violence and gore” because Robertson is seen preparing a duck he had killed for dinner.

Robertson plucks the bird over a pot as he talks about great music and Christian values, as well as how much he loves organic food straight from God’s creation. He also beheads the duck with a clean cut from a butcher’s knife.

Robertson showed the screen he received on his video and asked where people think their food comes from.

The Duck Commander was none too pleased with Facebook’s decision.

He spread the news of the censorship on Twitter while ripping Facebook a new one (Allegorically speaking, of course. Otherwise, that would get him legitimately censored.):

Graphic violence? Where do these people think their food comes from?!https://t.co/DiZATJlnSn pic.twitter.com/YYAcjAiYVD

This is why we're not on cable or Facebook. Only @CRTV won't shut us down for the truth. #ImWithPhilhttps://t.co/DiZATJ3N0P pic.twitter.com/Fmn8n3Uctq

Hmmm… so you can’t actually show these Whole Foods shoppers where a great many Americans that don’t live on kale and soy get their food?

Do the Facebook gods think that there’s a magic meat fairy that pops those packages of free-range, organically fed chickens in those styrofoam packages wrapped in plastic on the supermarket shelves?

The burning question is:  Is it the dead duck that is offensive or Phil Robertson talking about hunting, music, and God?

Check out the Duck Commander talk about ‘organic’ food here on his new show:

"You can call me Mr. Organic." Phil Robertson "The Duck Commander" is back and he's already ticking off lefties!There's more where this came from on In the Woods with Phil! Watch online: http://bit.ly/2yD3mzQ

You can go onto CRTV’s Facebook page and watch the new show ‘In the Woods with Phil‘ there. 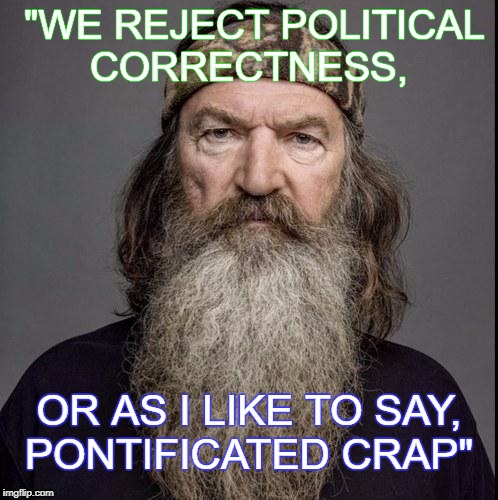 And don’t forget to grab one of these shirts to tick off your liberal co-workers.